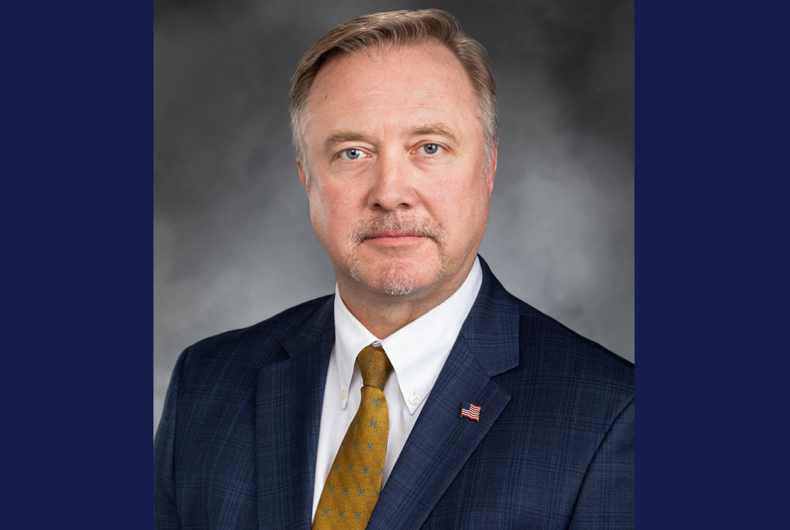 Washington state Sen. Doug Ericksen (R), a lawmaker and lobbyist who was once part of Donald Trump’s attempt to “reshape” to the Environmental Protection Agency (EPA), died on December 17, his family said in a statement. He was 52 years-old and survived by his wife Tasha and two children.

Circumstances of Ericksen’s death, such as his cause of death and location at the time of his death, remain unclear. Ericksen was last known to be in Florida, where he was transported to via El Salvador in November, because he was sick from coronavirus and unable to receive antibody treatment he had desired.

Related: Support for anti-trans laws has increased. But trans people can reverse this by coming out.

Ericksen consistently voted against pro-LGBTQ legislation, including marriage equality, at each opportunity over his 22-year legislative career. In 2016, he sponsored a “bathroom bill” that came within one vote of passing the Washington State Senate. He claimed a rule protecting trans people’s ability to use facilities in accordance with their gender identity was a “mandate on men using the women’s locker room.”

Last month, Ericksen had told reporters and his staff via email that he was essentially stranded in El Salvador, where he had travelled despite the Department of State’s recommendation to “reconsider” travel to the country. He sought treatment for coronavirus involving monoclonal antibodies, but didn’t know how to obtain it since it wasn’t available in Central America.

“I took a trip to El Salvador and tested positive for COVID shortly after I arrived. I cannot get back home, and it’s to the point that I feel it would be beneficial for me to receive an iv of monoclonal antibodies (Regeneron),” Ericksen said in an email obtained by media on November 11. “I have a doctor here who can administer the iv, but the product is not available here.”

He pleaded, “Do any of you have any ideas on how I could get the monoclonal antibodies sent to me here? Ideally, I would like to get it on a flight tonight so it would be here by tomorrow.”

His colleagues were unaware of his whereabouts, and reported not receiving the requests he made asking for help obtaining treatment. His actions thereafter remain largely unknown.

A former colleague of his in the state House revealed that Ericksen was transported via medevac flight just over a week later from El Salvador to Florida, where he was getting treatment in a hospital.

Thereafter, details of Ericksen’s whereabouts or health were unknown. According to the Seattle Times, it was also unknown if he had ever been vaccinated or not. Even when flooding hit his area, constituents and colleagues of Ericksen did not hear from him, with the caucus referring to his status as a “family matter.”

Then, his death was announced in a statement from his family that didn’t name a cause of death or location.

“We are heartbroken to share that our husband and father passed away on Friday, Dec. 17. Please keep our family in your prayers and thank you for continuing to respect our privacy in this extremely difficult time,” the Ericksen family’s statement reads.

Washington state Republicans were being informed of his death this weekend when the news broke. The state’s Senate Majority Leader John Braun (R) told the Times it was “heartbreaking,” while state Sen. Phil Fortunato (R) said he was “a little bit taken aback and dumbfounded” by Ericksen’s “tragic” death.

Within 60 days, a county commission will appoint one of three party-nominated officials to replace Ericksen for the remainder of his term.

Ericksen was born in Bellingham, Washington, and lived in nearby Ferndale for the majority of his life, studying at Cornell before obtaining a master’s degree in both political science and environmental policy from Western Washington University.

He first won a seat on the state House of Representatives for the 42nd district in 1998, and would go on to win reelection six more times. In 2010, he was elected the state senator for the same district in the Washington State Senate, where he would remain from 2011 until his death.

As the longest serving senator and ranking member of the Senate’s environmental committee, Ericksen became largely known for opposing Democrat-led climate policies. It wasn’t until the Washington State Human Rights Commission implemented regulations which protected trans people’s rights to use restroom and locker room facilities according to their gender identity, that Ericksen began openly lobbying against LGBTQ rights.

Although the regulations, as a result of the Washington Law Against Discrimination passed in 2009, were considered for years, Ericksen accused the Commission of creating the rule “in secret” in late 2015 without telling anyone.

He introduced Senate Bill 6443, which sought to rescind the rule and require that schools or businesses only allow trans people to use restroom facilities “on a case-by-case basis.” While he expected to have bipartisanship support for the bill, many of his colleagues went across the aisle to vote against it, and the Republican-controlled Senate rejected the bill by a vote of 24 for, and 25 against.

In a 2016 interview with conservative radio host Lars Larson, Ericksen said the notion of trans people using bathroom facilities that align with their identity was “scary” and that “this has gone way too far.” He admitted in the interview that he only learned about the rule protecting trans people’s rights from posts condemning it on Facebook: “I thought it was one of those Facebook myths being made up, and people said that couldn’t be true,” he said.

Like other conservatives around the country did at the time, Ericksen inaccurately claimed that the protections allowed predatory “men” to enter women’s bathrooms without repercussion. He also blamed Democrats for “really creating this situation for themselves” by allowing LGBTQ rights advocates that supported trans rights to lobby them and pledged further opposition to trans rights.

Still, the bill wasn’t Ericksen’s only time going against LGBTQ rights. He never voted in favor of any pro-LGBTQ legislation, starting in 2008, when he voted against a measure to grant people in domestic partnerships some of the same rights as spouses under the law — which succeeded anyway.

According to VoteSmart, Ericksen voted against a similar, more expansive measure the next year, which also passed. He voted against granting same-sex couples the right to adopt in 2011, marriage equality in 2012, and banning conversion therapy in 2018. In each instance, the bill still became law.

In 2016, Ericksen also became an outspoken supporter for Donald Trump, and operated his campaign within Washington state that year, which fell short to Hillary Clinton’s by 500,000 votes, although Trump won the election nationwide.

Ericksen accepted a role in Trump’s effort to “reshape” the EPA in 2017, with the tentative title of Senior Advisor to the Regional Administrator for Public Engagement. However, the Trump administration’s accommodations allowing him to work partially outside the EPA’s regional offices in Seattle proved untenable with maintaining his senate position, which he refused to resign from.

Ericksen turned down the job in January 2018 because they were “different than how I understood the position” but believed he still had “much to offer to the Trump Administration.” He won what turned out to be his last race by less than 50 votes in 2018.

Ericksen also began lobbying for foreign officials, and registered as a “foreign lobbyist” on behalf of Cambodia in 2019. He also took trips to El Salvador in 2020, around the time elections were held in the country.

Ericksen supported Trump’s claims that the 2020 election was stolen, and introduced legislation to that effect. He also began vocally opposing measurements by Gov. Jay Inslee (D) to prevent further spread of the coronavirus.

In 2021, he called it “discrimination” to place restrictions on unvaccinated people, and proposed failed legislation banning vaccine mandates.