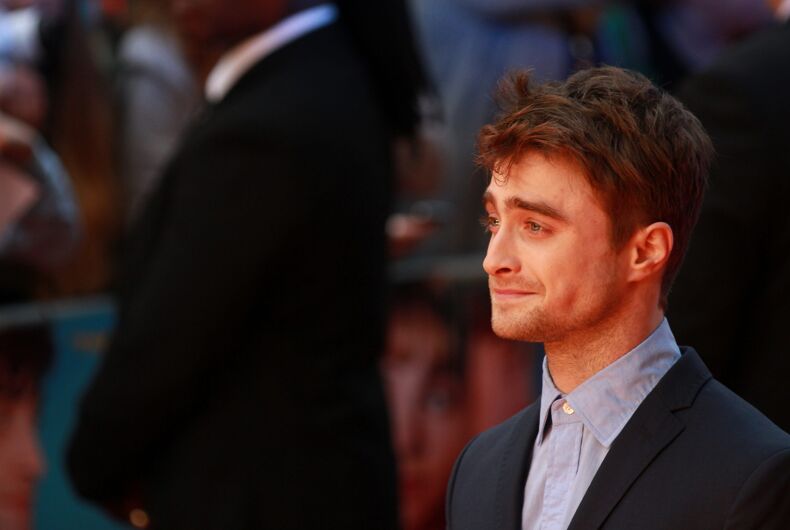 Actor Daniel Radcliffe, who played Harry Potter in the films based off J.K. Rowling’s hit book series, has responded to the author’s anti-trans tweetstorm. Rowling recently announced that she supports female activists who harass and demean transgender women online.

The children’s author, who has a strong Twitter presence, has liked transphobic tweets in the past. The first time her publicist said that the author clicked “like” by accident in a “clumsy and middle-aged moment,” but her recent tweets put the lie to the statement quite clearly.

Radcliffe, a longtime supporter of the LGBTQ community, has responded to Rowling through a statement posted to the Trevor Project website. The group supports LGBTQ youth and runs a suicide hotline.

“While Jo is unquestionably responsible for the course my life has taken, as someone who has been honored to work with and continues to contribute to The Trevor Project for the last decade, and just as a human being, I feel compelled to say something at this moment,” Radcliffe says in the statement.

“To all the people who now feel that their experience of the books has been tarnished or diminished, I am deeply sorry for the pain these comments have caused you,” Radcliffe continued. “I really hope that you don’t entirely lose what was valuable in these stories to you.”

Known as “transgender exclusionary radical feminists” or TERFs, the small cult of women the author supports has stirred up anti-trans sentiment in the United States and England. Despite having many lesbian followers, the unorganized group has started to align with the religious right in America to oppose legal protections for transgender people. They typically recruit followers online.

In December, Rowling tweeted that “sex is real,” a common statement used by transphobes to imply that sex assigned at birth determines a person’s entire life, effectively erasing gender identity. She used the hashtag #IStandWithMaya in that tweet, a reference to British anti-transgender activist Maya Forstater, who lost her job at a progressive organization for her statements about transgender women, including “men cannot change into women” and that transphobia against trans women only “hurts men’s feelings.”

Last month, Rowling was retweeting children’s drawings of an upcoming character for a project she’s working on. But when she shared a nine-year-old girl’s sketch, she also included a line copied from an anti-transgender message that included the f-bomb and extremist rhetoric.

Rowling later apologized on Twitter to the girl’s parents and offered to send them an autographed copy of one of her books.

“If these books taught you that love is the strongest force in the universe, capable of overcoming anything; if they taught you that strength is found in diversity, and that dogmatic ideas of pureness lead to the oppression of vulnerable groups; if you believe that a particular character is trans, nonbinary, or gender fluid, or that they are gay or bisexual; if you found anything in these stories that resonated with you and helped you at any time in your life — then that is between you and the book that you read, and it is sacred,” Radcliffe added.

“And in my opinion nobody can touch that. It means to you what it means to you and I hope that these comments will not taint that too much.”

If sex isn’t real, there’s no same-sex attraction. If sex isn’t real, the lived reality of women globally is erased. I know and love trans people, but erasing the concept of sex removes the ability of many to meaningfully discuss their lives. It isn’t hate to speak the truth.

Pride in Pictures: Fresh from the 90s