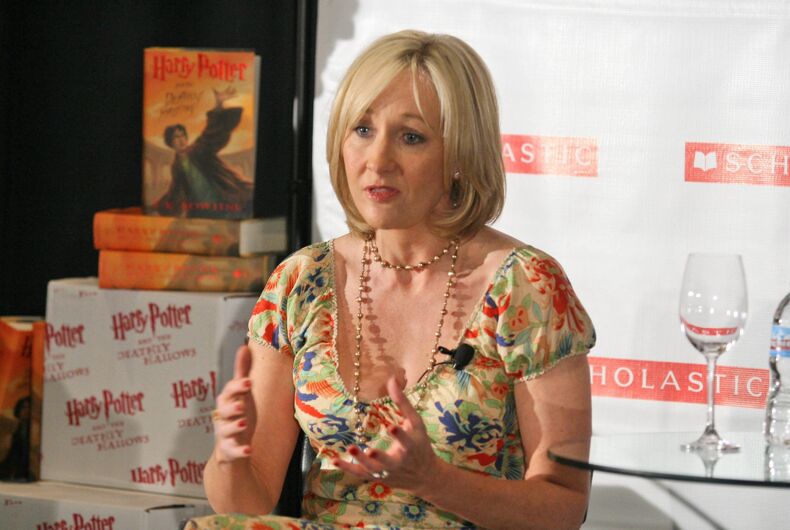 After the historic Supreme Court ruling that LGBTQ people are covered under Title VII of the Civil Rights Act of 1964, Democrats tried to use the momentum to bring the Equality Act to a vote in the Senate. The proposed law would make it illegal to discriminate in employment, housing, health care, and other areas.

Two Republican senators quickly spiked the move, with one of them citing British Harry Potter author J.K. Rowling to claim that the bill didn’t have enough “empathy” for those who want to discriminate.

Related: Staff at J.K. Rowling’s publisher won’t work on her new book after her anti-trans rants

Rowling has caused controversy lately with a string of anti-transgender tweets and a long rambling essay on her website that attempts to justify her callous position that transgender women aren’t women. Rowling’s excuses amounted to little more than red herrings, complaints, and a solid dose of female fragility tropes.

Actors from the Harry Potter movies quickly lined up to denounce Rowling’s views and support trans people after the author doubled down in the essay.

It was the essay that Senator James Lankford (R-OK) cited in his lament for the religious right.

“We don’t want anyone to be discriminated against, anyone, but we can do this in a way that accommodates everyone, and that we can actually work towards agreement,” Lankford said.

“To say in the words of J.K. Rowling this past week where she wrote, ‘all I’m asking, all I want is for similar empathy, similar understanding to be extended to the many millions of women whose sole crime is wanting their concerns to be heard without receiving threats or abuse.’ Let’s work together to get equality. This bill does not do it in this form.”

The Equality Act would specify that anti-LGBTQ discrimination is a form of sex discrimination – the same reasoning the Supreme Court used in its decision this week. It would apply to employment, education, housing, jury service, public accommodations, federal programs, and credit.

The law would also declare that the Religious Freedom Restoration Act, a 1994 law meant to protect religious liberty, can’t be used as a license to discriminate against LGBTQ people.

“While Jo is unquestionably responsible for the course my life has taken, as someone who has been honored to work with and continues to contribute to The Trevor Project for the last decade, and just as a human being, I feel compelled to say something at this moment.

Celebrate the victory & dream for the future. The SCOTUS ruling is only the beginning.