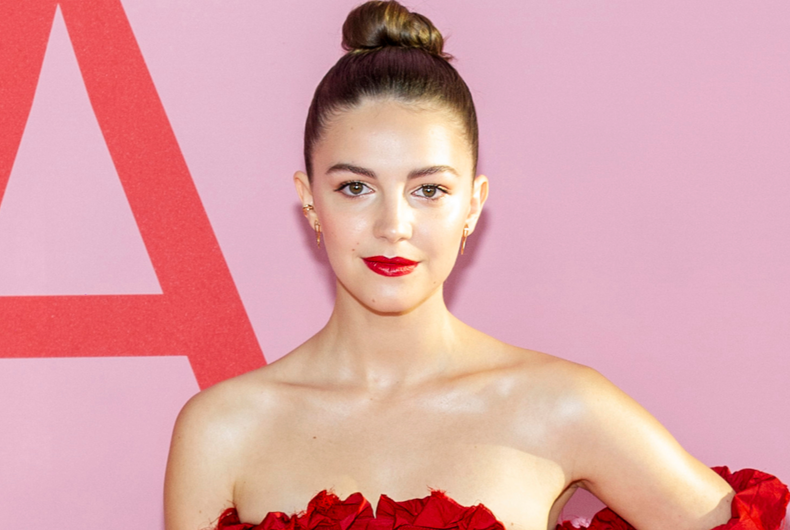 This year we saw more celebrities than ever take that brave step of coming out and sharing their true selves with the world, and they’ve had a major impact on their fans and those struggling with their sexuality or gender.

Check out this list of 15 famous faces who came out publicly in 2021 and started flying the rainbow flag with pride.

Demi has been open about their fluid sexuality in the past but, in May 2021, revealed on their podcast, 4D with Demi Lovato, that they are non-binary, saying, “Over the past year-and-a-half, I’ve been doing some healing and self-reflective work. And through this work, I’ve had the revelation that I identify as non-binary. With that said, I’ll be officially changing my pronouns to they/them.”

Also this year, they opened up about being pansexual, saying they are now “so fluid” and “proud” to be who they are.

The Bachelor star came out as gay on Good Morning America. Saying that he now feels hopeful and positive about the future, Colton said: “I ran from myself for a long time. I’ve hated myself for a long time, and I’m gay. And I came to terms with that earlier this year and have been processing it. The next step in all of this was letting people know. I’m still nervous. It’s been a journey, for sure.”

He added that he’s never been happier or healthier.

Courtney came out as non-binary earlier this year as they announced that they now use they/them/theirs pronouns. They said they’ve always felt like they “don’t fit in anywhere,” and now when they look at their reflection, see “a human being so far away from norms, misogyny and labels.”

“I live by my own rules now. I’m excited to show the world all of the sides to who I am on this new journey.”

Emma Corrin – best known for their work on The Crown – seemingly came out as queer in a casual Instagram post this year. Emma posted images from a bride-themed photoshoot with the caption: “ur fave queer bride.”

They then added she/they pronouns online without an announcement but said in an interview later on: “My journey has been a long one and has still got a long way to go. I think we are so used to defining ourselves. That’s the way society works within these binaries and it’s taken me a long time to realize that I exist somewhere in between and I’m still not sure where that is yet.”

She has also posted photos with her chest binder, encouraging fans to “embrace” their identities.

The Drag Race star came out as trans and opened up about her transition in August. She shared the news on Instagram in a candid video following female feminization surgery. Gigi first came out as gender fluid on the reality TV show two years ago, which she says she still “very much identifies with,” however, she now “leans more towards” the non-binary side of that. She credited the pandemic bringing the world to a standstill for giving her time and space to figure things out.

“I do identify as a trans non-binary person, but I prefer she/her pronouns,” she said, saying that she’s also undergoing the “long, strenuous process” of legally changing her name to Gigi.

JoJo broke the internet when she came out at the beginning of the year. She initially shared a snap of a new shirt bought for her by a cousin, reading “Best gay cousin ever.” She later introduced her girlfriend to the world. When asked what her label is, the dancer said she doesn’t know the answer.

The Dance Moms star has since inspired countless fans with her words of encouragement and by being proudly herself. She also appeared on Dancing With The Stars this year in the show’s first female-female partnership.

The actor and singer came out as LGBTQ after making comments about finding Harry Styles “hot.” Speculation around his sexuality followed, and the High School Musical star later clarified in a powerful Twitter statement.

He wrote: “My entire life people have told me my sexuality. People have shamed me for things they know nothing about. It’s 2021. We are the generation of love and growth, it’s time we start acting like it. Whether you love me, hate me, or damn me to hell, I love you all the same. Love who you love shamelessly. It’s okay to still be figuring out who you are.”

He also confirmed to GQ that he is “happy to be a part of the LGBTQ community because they embrace all.”

The 13 Reasons Why actor came out as a transgender woman in an interview and photoshoot with TIME, saying she felt her medical transition was her “reintroduction to the world.”

“Coming out is always viewed as this grand reveal, but I was never not out. Today is about clarity: I am a trans woman. My pronouns are she/her. My name is Tommy,” she shared, ending the chat by calling her transition “liberating and clarifying,” adding that she’s looking forward to a future where she is “radically honest.”

The Brothers Osborne singer became the first openly gay artist signed to a major country music label. Speaking to TIME, he said: “I’m very comfortable being gay. I find myself being guarded for not wanting to talk about something that I personally don’t have a problem with. That feels so strange.” He said he doesn’t want coming out to be a big deal, admitting he wants to “just move on,” however, he recognizes the importance of visibility.

“People will ask, ‘Why does this even need to be talked about?’ and personally, I agree with that,” he explained. “But for me to show up at an awards show with a man would be jaw-dropping to people. It wouldn’t be like, ‘Oh, cool!’”

Ella – who plays Sue Gilbert alongside Hailee Steinfeld in the TV show Dickinson – came out in an interview, where she expressed love for the term “queer.” Later on social media, the actor responded to criticism of her describing queerness as an “attitude,” admitting that she became anxious when being interviewed as she stayed silent about her sexuality for so long.

She later tweeted: “I am queer and I am happy to be open about it.”

He became the first openly gay man to play in the NFL after coming out back in the summer. In a video posted to his Instagram during Pride Month, the player shared: “I just want to take a quick moment to say that I’m gay. I just think that representation and visibility are so important. I actually hope that like one day videos like this and the whole coming-out process are just not necessary, but until then I’m going to do my best and my part to cultivate a culture that’s accepting, that’s compassionate.”

He also donated $100,000 to The Trevor Project after struggling with his own sexuality for 15 years.

Musician Kehlani has been pretty open when it comes to sexuality in the past, previously coming out as queer and using she/they pronouns. But in 2021, the R&B singer came out as a lesbian. In a video posted on TikTok, she said: “I’m just gonna f***ing say it, because everybody keeps bringing it up to me. I finally know I’m a lesbian. I am gay, g-gay, gay.”

Love, Simon actor Alexandra publicly came out as queer in a heartfelt social media post, she said she denied her sexuality until the age of 28, and was scared about not being loved or even losing work if she told people about her sexuality.

“It’s exhausting being scared all the time. It’s exhausting chasing other people’s ideas and opinions of who you should be,” she said, before reminding fans that it’s never too late to be who they truly are.

Josh hit headlines when he made history as the world’s only openly gay professional male footballer. The Adelaide United player said he had been “hiding” his true self, but finally felt comfortable speaking out about his sexuality.

“There’s something personal that I need to share with everyone. I am a footballer and I am gay,” he explained in the clip shared to his team’s social media.

“It’s been a journey to get to this point in my life, but I couldn’t be happier with my decision to come out. I have been fighting my sexuality for six years now and I’m glad I can put that to rest,” he said.

Billy is openly gay, but his 2021 coming out was a little different from the others in this list as, in May, he shared that he’s been living with HIV for 14 years. The Pose star was diagnosed in 2007 and initially “lived with that silence in shame.”

But speaking to The Hollywood Reporter about wanting to tackle the stigma surrounding being HIV positive, he said: “It’s time to grow up and move on because shame is destructive and, if not dealt with, it can destroy everything in its path.”

Sharing that he takes medication, thanks to which HIV looks very different today, he added: “I’m going to die from something else before I die from that. My T-cell levels are twice yours because of this medication.”