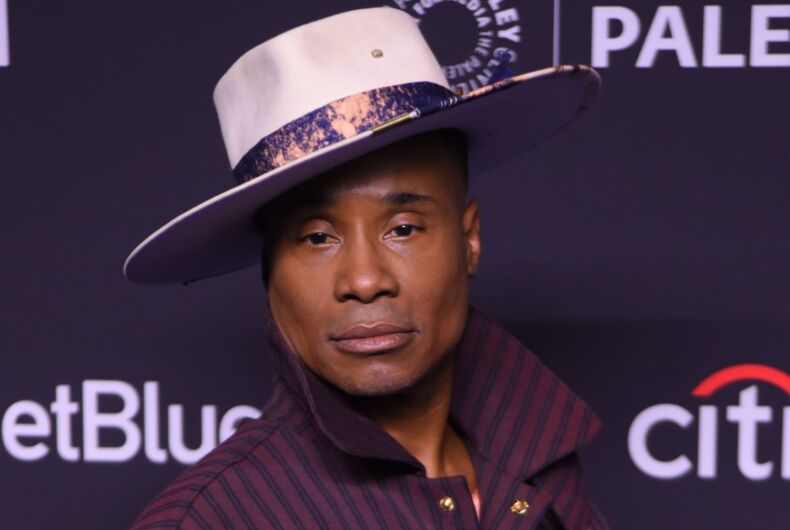 Out actor Billy Porter has publicly discussed his HIV-positive status for the first time since he was diagnosed 14 years ago.

“I survived so that I could tell the story. That’s what I’m here for,” the Pose star told The Hollywood Reporter. “It’s time to grow up and move on because shame is destructive — and if not dealt with, it can destroy everything in its path.”

Porter said that it was a “fluke” that he was diagnosed in 2007, which he described as the worst year in his life. He filed for bankruptcy and was diagnosed with diabetes that year, as his career in show business stalled.

After the test, he met with a doctor.

Porter said that he told all the people he was close to who he felt should know – except his mother. He worried about her reaction and said that she “had been through so much already, so much persecution by her religious community because of my queerness.”

He was raised in the Pentecostal church and said that at age five he was made to see a psychologist because he “came out of the womb a big old queen.”

Furthermore, Porter said that he didn’t want word to get out that he was HIV-positive because he didn’t want to face further discrimination in his work.

“I was embarrassed,” he said. “I was ashamed. I was the statistic that everybody said I would be.”

He decided to wait until his mother died “and then I’ll write my book and come out and she won’t have to live with the embarrassment of having an HIV-positive child.”

But COVID-19 forced him and his husband, Adam Smith, to move out of New York City and he worked on his past traumas in therapy, traumas that include homophobia, religious abuse, and sexual abuse as a child.

Porter said that he realized he had to tell his mother, so he called her nursing home.

“You’ve been carrying this around for 14 years? Don’t ever do this again. I’m your mother, I love you no matter what,” he said she responded.

Porter also cited his work on Pose as helping him come to terms with his shame. On that show, he plays the role of Pray Tell, an HIV-positive gay man who emcees in the Ball scene.

“I was able to say everything that I wanted to say through a surrogate,” he said.

Porter says that he’s now “the healthiest I’ve been in my entire life.” He’s devoted to his husband, and their relationship helped him realize that he has to live better because “it’s not just me.”

“I’m completely undetectable,” he said about being in a mixed-status relationship with Smith. “That’s the amazing part of the developments.”

14 years he held this secret.
Thank you @theebillyporter for honesty, your realness, your joy. An exclusive conversation on the @tamronhallshow today. pic.twitter.com/YL5ZeZU4VW