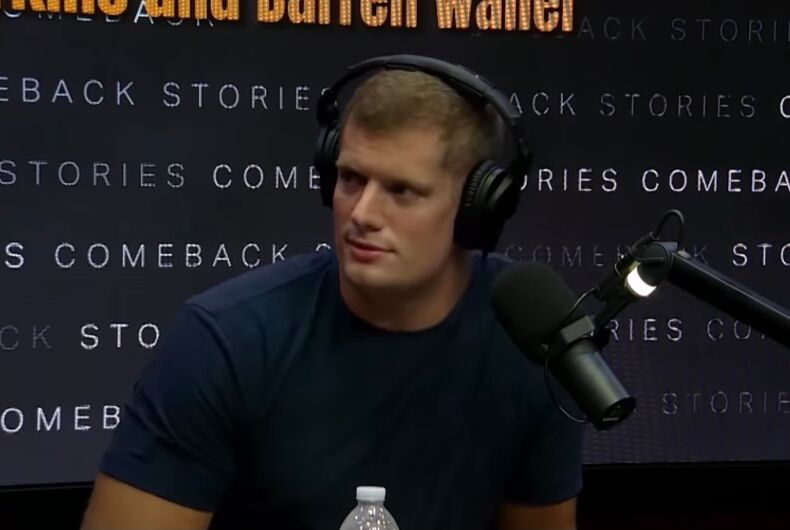 Las Vegas Raiders defensive end Carl Nassib, the first player to play in a NFL regular season game while being publicly out, sat down for a rare interview with the Comeback Stories podcast, hosted by Donny Starkins and Darren Waller, Nassib’s teammate.

During the 36-minute sitdown, Nassib rehashed much of his life and career prior to coming out, and also explained what led him to come out this offseason. He also revealed how he “met an awesome guy” earlier this year that he’s now dating.

“When I decided to come out, it was not easy. Personally, for my life, I didn’t want to do it. But I felt a huge obligation to my community, to all the young kids out there who are struggling with their sexuality,” Nassib explained. “If I could help just a few of them out, then I could sleep better at night.”

He also explained how he wanted to come out originally in 2020, but the pandemic convinced him to wait until he could have the in-person support of his locker room.

Nassib also said he “was going back and forth about coming out to his team before coming out to everybody.” He felt that the team he had around him during that offseason inspired him to take the leap this summer.

“I was like, damn, what other gay guy has to come out to his entire business?” Nassib joked. “Coming out to one person is stressful enough. I’m not about to sit up there and have my voice crack a thousand times. So I wanted to be at home, with my best friends, with my family, [in] a comfortable position.”

“I can take care of myself, you know what I mean,” he said, hinting at his physical strength, “but I’m so freaking lucky that everyone that went through it just not too long ago… went through so much discrimination, so much heartache, and couldn’t live the life they wanted to. I’m so blessed.”

After years of a lack of representation playing across male sports, Nassib made the difference by coming out on June 21 with a simple Instagram post. He also donated $100,000 to the Trevor Project, which fights LGBTQ youth suicide.

Nassib asked for privacy and hasn’t spoke much after that announcement, not commenting publicly outside of Instagram posts and taking questions at an August press conference where he thanked those that supported him.

This serves as Nassib’s first off-field sitdown since coming out, although he still had his teammate by his side. During the podcast, Nassib also talked about the fact that the only thing he was missing in life was to be “someone’s number one priority.” He dished on a guy that may finally fill that void for him, saying “he’s the best.”

The Raiders, who are currently 3-0, take on the Los Angeles Chargers tomorrow on Monday Night Football on ESPN.

The full episode of Comeback Stories is available below.