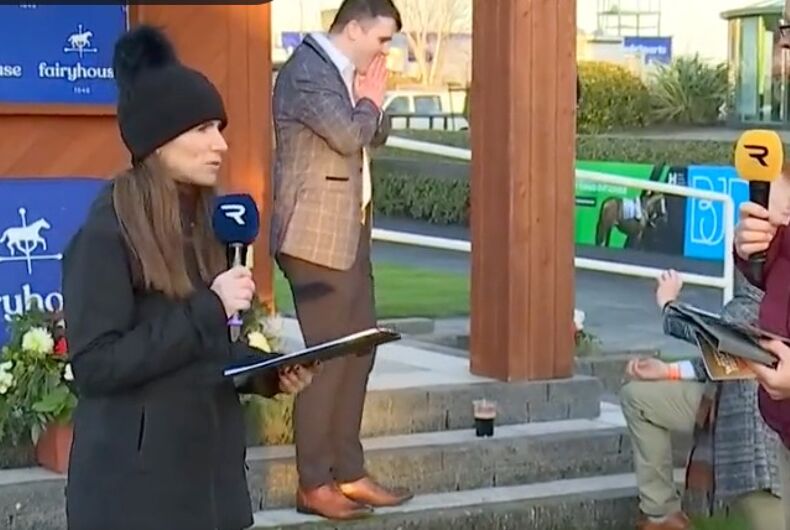 A live TV broadcast was interrupted as two newscasters covered a horserace.

Viewers watched as a young man proposed and was rejected by his partner while the two oblivious reporters continue talking.

Irish television reporters Gary O’Brien and Lisa O’Neill were deep in discussion about the races when the man got down on one knee. O’Brien noticed the men but continued talking to O’Neill.

The boyfriend, however, shakes his head and walks away, leaving his lovestruck partner on camera alone.

After the first man stands up with shock dramatically written all over his face, viewers got their first clue. But O’Brien did not.

“I think these two guys behind us are getting married,” he quipped as the man spun around with his hands to his face. “Wish them well, Lisa. I think they’re going to be very happy together.”

When a large group of other guys showed up to surround the lovelorn suitor, jumping up and down with a suddenly exuberant attitude, viewers saw that it was a prank as the reporters walked off screen.

The station threw back to the in-studio announcer who couldn’t stop laughing.

“It was really good!” he chortled before trying to stumble through a quick recap of the prank before just giving up and moving on.

🎩 Young love can be so fickle

These lads clearly had a great at @Fairyhouse despite a bit of heartbreak for this chap in the background 😂😂 pic.twitter.com/d01riLQP6v