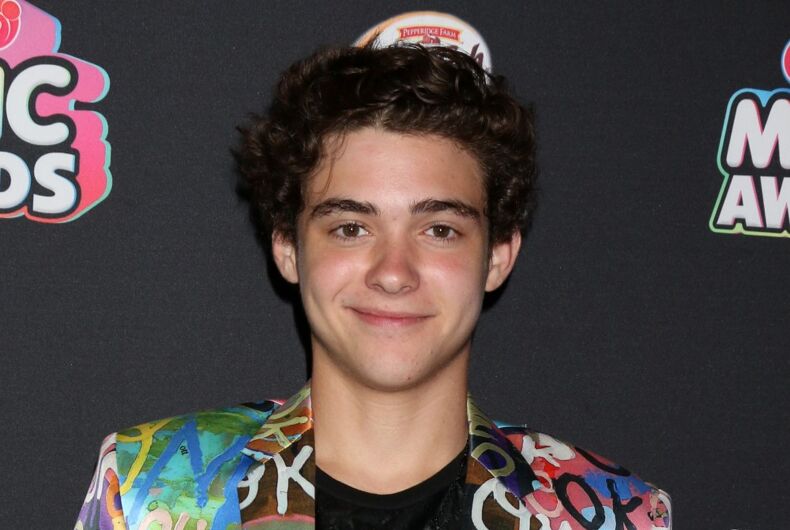 Disney actor Joshua Bassett just came out as queer in a video and then a statement posted to social media.

Bassett, who stars in the series High School Musical: The Musical: The Series, gushed over musician Harry Styles in a YouTube video.

Related: Kate Winslet knows “at least four” actors who are “terrified” of coming out in Hollywood

He then got a bit nervous.

“This is also my coming out video, I guess,” he said.

Joshua Bassett comes out as queer in new interview where he compliments Harry Styles:

“Who doesn’t think Harry Styles is cool? Also he’s hot, you know… This is also my coming out video I guess.”

That was yesterday, and a few pop culture websites were left asking if he really came out or if that was an actual joke. And now he has cleared that up with a statement posted on Twitter.

“My entire life people have told me my sexuality,” he wrote in his statement. “People have shamed me for things they know nothing about.”

“Love who you love shamelessly,” Bassett continued. “It’s ok to still be figuring out who you are.”

“Life’s too short to let ignorance and hatred win. I choose love.”

He did not specify exactly how he would describe his sexual orientation, and his fans are already pointing out that he owes no one an explanation.

SO HAPPY FOR YOU!! you are so incredibly valid. ❤️❤️

to anyone in here who wants him to clarify, no. he doesn't owe us any clarification and you need to respect that! leave him alone.

for those of u lost,yes he is coming out and going against compulsive heterosexuality also somebody’s sexuality is none of our business & not for anybody else but ourselves to take pride in:) Joshua ily & im so proud of u

we love u sooo much joshua and i’m beyond proud of u for everything :)