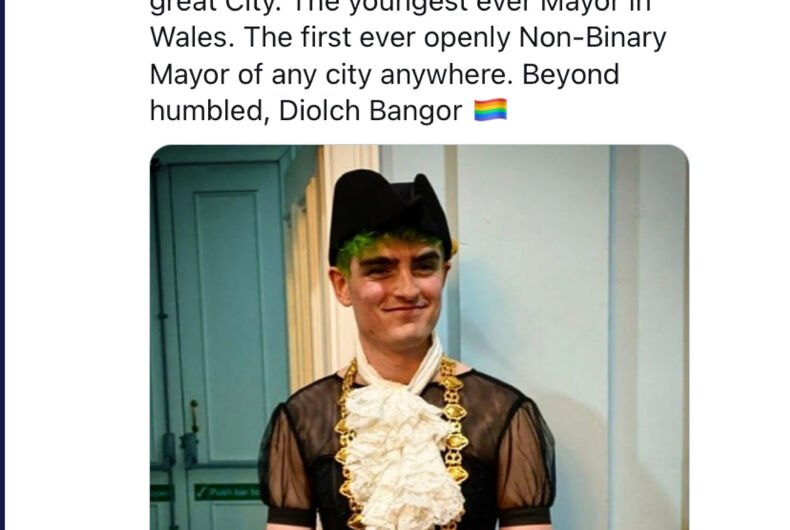 Owen Hurcum celebrating their election as mayor of Bangor.Photo: Screenshot/Twitter

“When I came out two years ago I was so worried I’d be ostracized by my community or worse,” they said on Twitter on May 10. “Today my community elected me Mayor of our great City. The youngest ever Mayor in Wales. The first ever openly Non-Binary Mayor of any city anywhere.”

Related: Eddie Izzard vows to be first trans parliament member no matter how many times she has to run

Hurcum is agender and genderqueer.

“Beyond humbled,” they added. “Diolch Bangor.” Diolch is Welsh for “thank you.”

“I know representation is not just putting on the chain and I’ll be judged by what we do as a team for Bangor during my year in office, but still, [I’m] glad my election has resonated with so many,” Hurcum said.

Congratulations to Cllr Owen Hurcum on becoming the new Mayor of Bangor. The youngest ever Mayor in Wales.

Hurcum was elected last year as deputy mayor. Prior to that, they were a councilor in the town for four years, ever since running as a college student.

In March, Hurcum stepped down as a candidate for Welsh Parliament with the Plaid Cymru party, accusing the party of practicing transphobia by including someone they said was a trans-exclusionary radical feminist.

“I want Helen Mary Jones to apologise in a way that is not ‘I’m sorry you’re offended.’ I want a sincere apology and I want her to make an effort to learn about the community and understand why she’s perpetrating transphobia,” Hurcum said. Jones denied the accusation.

“Adam Price, as the leader of the party, needs to make it very clear not just that Plaid have a great set of policies for if they’re in government, but are also tackling transphobia within their own party immediately,” they said of their party’s leader.

In the tweet, Hurcum included a photo of them wearing “a sheer black blouse and traditional mayoral chains and ruffles,” adding “a tricorne hat” and “colorful green hair.”

When I came out two years ago I was so worried I'd be ostracized by my community or worse. Today my community elected me Mayor of our great City. The youngest ever Mayor in Wales. The first ever openly Non-Binary Mayor of any city anywhere. Beyond humbled, Diolch Bangor 🏳️‍🌈 pic.twitter.com/pGHiaQTVaO

I'll be wanting to use my term to promote Bangor as much as I can, bring in investment and interest and celebrate the multi cultural community that makes out city the greatness that it is

What a tweet!! I want to live in Bangor! Wonderful. https://t.co/CfZGGrLSjG

Congratulations to @OwenJHurcum a world first!! Proud of you. https://t.co/EwZLY7JW7N

Huge congratulations to @OwenJHurcum for becoming the world's first nonbinary mayor. So proud to know you! Thanks for all the wonderful work you do online and in our area 🎉 https://t.co/V2Q9aHuVI9

Editor’s Note: This story has been corrected. Hurcum is 23-years-old, not 22.

No one likes Caitlyn Jenner according to “bleak” new poll