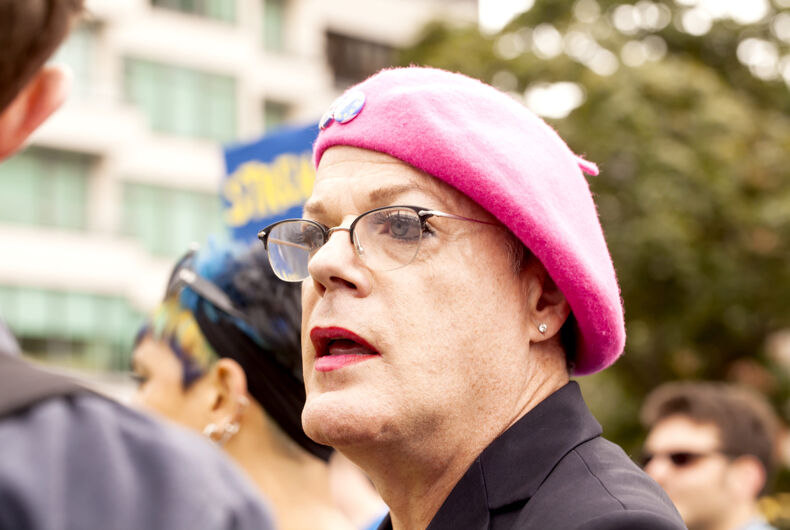 Eddie Izzard at the March for Europe on September 3, 2016 in London.Photo: Ms Jane Campbell / Shutterstock

Comedian and activist Eddie Izzard opened up about her recent use of she/her pronouns, her political hopes, and her feelings on trans-exclusionary radical feminists (TERFs) in an interview with the Guardian.

Izzard explains that her “announcement” that she uses “she” and “her” pronouns and is “based in girl mode” now was not meant to be “so definitive” — but Izzard has accepted it. “Great. I’ve been promoted to she, and it’s a great honour,” she laughed.

Related: Gay journalist egged by men in a car at Pride celebration

It started in January when Izzard’s appearance on the British reality series Portrait Artist Of The Year aired. She was referred to as she and her by the other guests and host Stephen Mangan.

Once Izzard’s pronouns preference were widely reported, many wrote it as a recent coming out, to which she reacted, “I went through such hell since [1985] that the idea that I’ve come out recently just sounds ridiculous.”

In explaining her identity to the Guardian, she explained that “some people are going: ‘Are you serious?’”

Izzard’s rebuttal: “I have floated this thing up as slowly as I f**king can. Thirty-five f**king years, mate, how much warning do you need?”

She also said that she’s more than willing to fight back with people willing to question her identity. “I was the right person to come out because if people were going to hurl abuse at me in the streets, as they have done, I would hurl it back. Sometimes it would just be us standing in the street swapping abuse or if they fight me, I’ll fight them back.”

As for her political hopes, Izzard reiterated again that she will seek office as much as she can until she wins election.

“Yes, I’ve told everybody that I can tell that I want to stand. But still, a lot of other people want to stand, so nothing is a given,” she remarked. “I’m not mucking about with this. I’m going in. If something goes wrong, if I stand in a byelection and I don’t get in, I’ll still go on. It doesn’t really matter because I am a relentless bastard.”

She initially reiterated in January that she was still vying to become the first transgender Member of Parliament.

“I wanted to stand in the last election but a seat wasn’t available – but I am here. I have been an activist since 2008, a member of the Labour Party since 1995,” Izzard said. “It’s a time of great separation in our country and around the world…. let’s make connections.”

“I don’t trust Boris Johnson,” she said about the current Prime Minister. “He has lied upon lied and that is not a good example to our children, to say if you lie enough you can become Prime Minister.”

As for the “fighting” between trans women and anti-trans feminists, Izzard said that the issue “saddens” her.

“I’d like to get to the place where we don’t have to have this fight because I’m trying to deal with rightwing fascists and what they say,” she remarked. Izzard previously stood up for J.K. Rowling and said, “I don’t think J.K. Rowling is transphobic… I hate the idea [that women] are fighting between ourselves.”

Izzard herself said, “relationships with me are tricky. You’ve got to be a woman who’s very self-confident about your own sexuality to go out with me… I don’t think I prefer it but I’m not going to agonize over it.”