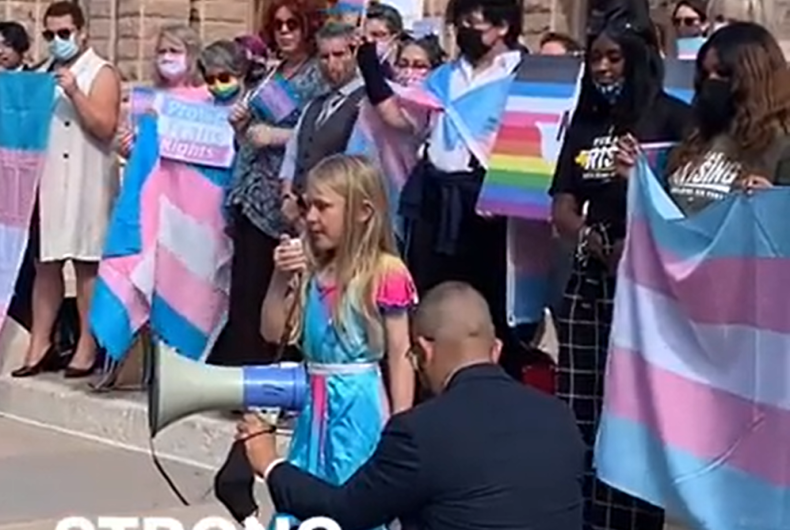 Exhausted transgender youth and their families in Texas again went to the state legislature to speak out against a ban on transgender students in school sports as Republican lawmakers tried to pass it for the fourth time this year.

This time, Texas House Speaker Dade Phelan (R) moved the bill from the education committee, where it died earlier this year, to the House Select Committee on Constitutional Rights and Remedies, where it passed yesterday.

Related: 4th grader who shamed Texas Republicans for attacking her rights is now getting death threats

One Democratic lawmaker noted that there are only 80 minors in the entire state who did so from 2018 to 2019, but that didn’t stop Republicans from attacking transgender youth.

“We all know men and women are built different, and the results prove the unfairness of forcing our daughters and granddaughters to compete against biological males. To say otherwise doesn’t just reject biology, it denies girls their dignity, self-confidence, and humanity,” state Rep. Valoree Swanson (R) said.

Swanson also said that there are boys in the state who transition just to win at girls sports. When asked when that has ever happened, she could not name an example.

The House Select Committee on Constitutional Rights and Remedies heard testimony all day, most from opponents of H.B. 25, including transgender youth and their families.

“Thankfully, none of these bills have passed, but trans kids are so traumatized that they’re calling a suicide prevention hotline begging for help,” she said. “The bill’s authors, and all who support this, are responsible.”

“Babies, I see you and love you so much,” the mom said, directing her words at trans youth. “We’re on your side, kids, because you’re worth fighting for.”

“You are just as beautiful and miraculous today as you were on the date of your birth.”

The opposition was less informed on the issue. According to Jessica Shortall of Texas Competes, one person told the committee “that men are stronger and faster,” referring to Mack Beggs, a transgender boy who was forced by Texas to compete on the girls wrestling team because he was assigned female at birth.

Shortall said that state Rep. Ann Johnson (D) told the man that Mack Beggs isn’t a transgender woman and asked if that changes his opinion at all.

Rep Ann Johnson presents this information about Mack Beggs to the testifier, asks if this changes his mind.
Man says “I’m very closed-minded.”
He also said kids are too young to decide they’re trans.
Suggests a separate “transgender league.”#txlege

Shortall described a woman testifying for the bill who said that if her daughter, who rides horses, “had to go against ‘biological boys,’ there’s no way she’d be a D1 athlete today.”

That was one of the main arguments used by anti-transgender activists, that cis girls simply cannot compete against trans girls in sports. This woman believed that that athletic inferiority extended to horseback riding as well.

A woman is testifying for HB25. Her daughter rides horses. She says that if her daughter “had to go against ‘biological boys’ there’s no way she’d be a D1 athlete today.”
It is hypothetical #txlege

Outside of the legislature, transgender youth, families, and advocates rallied to keep up morale as lawmakers demonized them.

“We should stay strong and hopeful and fight this bill head on.”

Despite the moving testimony against the bill, the committee voted in favor of the bill. It now goes to the full Texas House for a vote.

Rachel Maddow reveals she had surgery to remove skin cancer