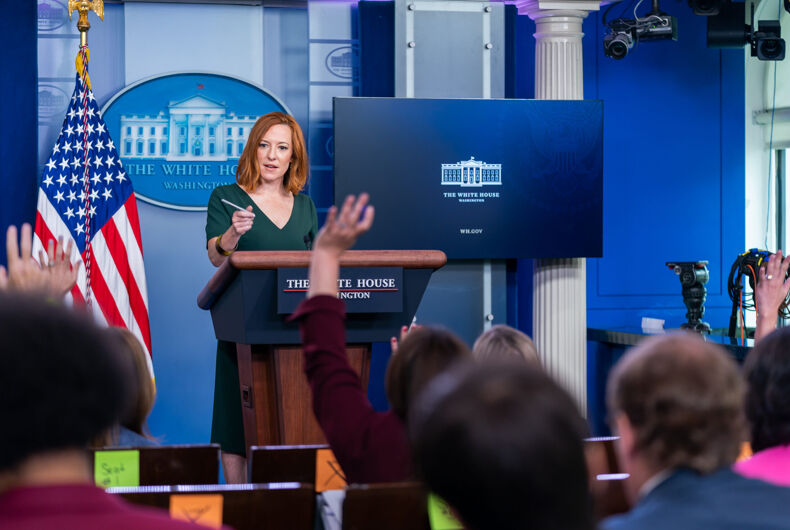 White House Press Secretary Jen Psaki had to remind a Fox reporter that issuing violent threats to school board members is a bad thing as he tried to defend the practice by, in a bizarre analogy, comparing local educators to out Sen. Kyrsten Sinema (D-AZ).

Peter Doocy brought up a letter from the National School Boards Association yesterday during the White House press briefing. The letter asks President Joe Biden to do something about violent far-right protestors attending and disrupting school board meetings across the country.

The protestors – who don’t always have children in the school system or even live in a school district they’re protesting – have been protesting transgender equality in schools, accusing schools of teaching “critical race theory” even when that is not happening, mask mandates to fight the coronavirus pandemic, and other issues that they often barely understand. Groups like Virginia Stand Up and Moms for Liberty have been getting people riled up with extreme and false statements and organizing the protests.

The National School Boards Association, which is not a part of the government, told Biden in their letter that the violent threats educators are receiving “could be the equivalent to a form of domestic terrorism and hate crimes.” Attorney General Merrick Garland, independent of the letter, asked the FBI and U.S. Attorney’s Offices to work with local law enforcement to help investigate the problem.

But that’s not how Doocy characterized the issue.

“Does the administration agree that parents upset about their kids’ curriculums could be considered domestic terrorists?” he asked.

“Let me unravel this a little bit,” Psaki answered, explaining the context of the letter. She said that Garland is “correct” to say that threats of violence against public servants “run counter to our nation’s core values.”

“Regardless of the reasoning,” she said, responding to the implication in Doocy’s question that terrorists aren’t terrorists if they’re concerned about education, “threats and violence against public servants is illegal.”

Doocy then brought up Sen. Sinema, who earlier this week was followed into a public restroom by immigration protestors. The protestors tried to tell her their stories about their experiences with the immigration system while she was in the bathroom. They never touched her or threatened violence against her.

“Of course,” Psaki said, before she proceeded to explain the difference between “violence” and “nonviolence” to Doocy.

Doocy: Does the President support the fundamental right of these parents to protest at these school board meetings?
Psaki: Of course but he doesn’t stand for people to take violent action against people who are public servants and that’s what the threats are about. pic.twitter.com/4e9RxGMgLY

While Doocy appears to be under the impression that the immigration protestors who talked to Sinema while she was in the bathroom will face no legal consequences, police in Arizona are already investigating them.