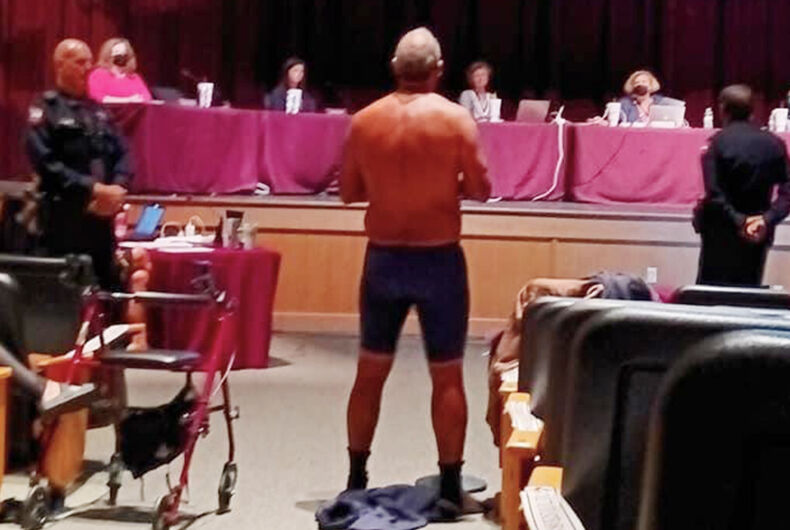 Texas father James Akers had a point to make when he stepped to the microphone during a meeting of the Dripping Springs Independent School District. The board was discussing a mask mandate for students to protect themselves and staff from the coronavirus.

Protests by anti-vaxxers and conspiracy theorists have roiled the country with their bizarre claims and ludicrous allegations. But Akers surprised everyone with his take on how to get attention: he started to strip out of his clothing as he spoke.

“I do not like the government, or any other entity, telling me what to do,” James Akers said at the beginning of his 90-second time limit. “But sometimes I’ve got to push the envelope a little bit. And I’ve decided I’m not just going to talk about it, I’m going to walk the walk.”

“At work they make me wear this jacket,” he said, taking it off. “I hate it.”

“They make me wear this shirt and tie,” Akers continued. “I hate it.”

Akers ran through a litany of laws he had decided not to follow as he continued to take off clothing.

“I have every right to drive as fast as I want to,” he said, saying he’d sped to the meeting without wearing a seatbelt while blowing through three stop signs and four red lights.

He said he parked in a handicapped spot when he arrived and dropped his pants.

“It’s simple protocol,” he said as they hit the floor. “We follow certain rules for a very good reason.”

The audience and board grew visibly uncomfortable during his speech as they wondered when he would stop.

“Mr. Akers, I understand,” one board member eventually remarked, “but if you wouldn’t mind putting your pants back on for a comment, that would be appreciated.”

The spirited display with an unexpected plot twist quickly went viral online as people reacted with admiration for his daring protest.

It's a legit point, to be fair.

Must have been pretty hot

Man strips in Dripping Springs, Texas school board meeting. Another sentence I never thought I'd type.