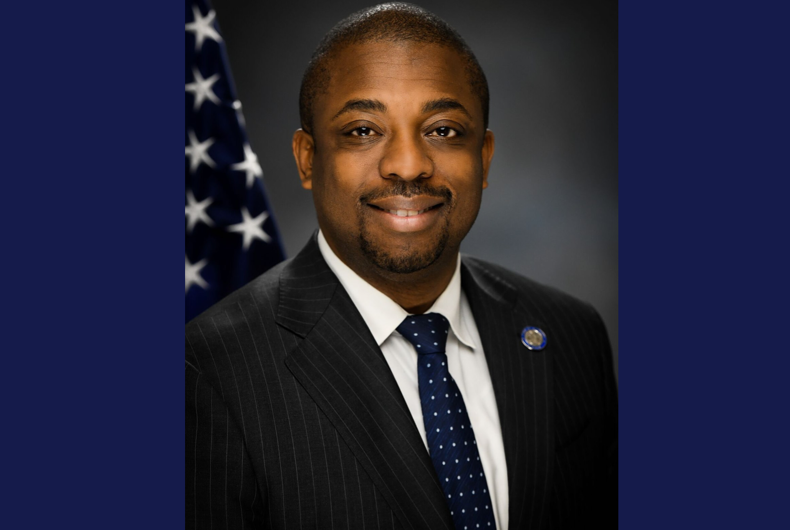 New York Gov. Kathy Hochul (D), after taking over for former Gov. Andrew Cuomo (D) following his resignation, has chosen state Sen. Brian Benjamin (D), to be her lieutenant governor. She is expected to make the formal announcement on Thursday.

But before Benjamin was elected to that seat in 2017, he was previously known for guest-appearing on the reality series Love in the City on the Oprah Winfrey Network (OWN). He was the boyfriend of Tiffany Jones, one of the show’s main cast members, until their relationship ended in terrible fashion — at least, for one of them — after he allegedly sought out other women.

Love in the City followed four women living in New York City, each at different stages of life, trying to find or maintain relationships. During the show’s only season, which aired in 2014, Jones — a two-time cancer survivor who founded the nonprofit Pink Chose Me— moved in with Benjamin and had hoped to marry him and have children.

That is, until she caught him chatting with other women online via the now-defunct Google Talk, only weeks after she had surgery. In some episodes, Benjamin even openly flirts with a waitress while on a date with Jones.

In the show’s seventh episode, Jones goes to confront Benjamin about the issue — at his family’s home, on his birthday, in perfect reality show fashion — but is unsatisfied with how he won’t own up to his actions. Bootlegged recordings of the full episode are currently available online. (Only six episodes were aired before cancellation, based on the show’s IMDb.)

“That’s Brian, always being political,” Jones remarked at one point.

“I don’t want to be married to a man, and have children with a man, that’s G-chatting inappropriately with another woman you claim you don’t care about,” she told him.

Jones told Benjamin that she was leaving, and he did not try to stop her until she packed her stuff from his family’s home in Queens and began leaving. Benjamin then tried to stop her, but Jones told him she’s tired of his “tough guy” act and that she’s disappointed that he’s okay with her leaving.

“Just tell me how you feel,” Jones asked. “Because right now, this tough guy routine, ‘see you later, bye’ … Just tell me you love me, I want you to tell me this is never going to happen again.”

“Exactly — ‘See you later, bye,'” she said, and she got into a car and left as he watched.

Later in the episode, Jones — who previously wasn’t comfortable sharing details about her issues with Benjamin with her fellow castmates — not only revealed that the relationship has ended, but their issues didn’t end there and it got “ugly.”

Jones explained to Kiyah Wright, the show’s central member, “I said I was going to take some time and just chill out for a while, and I think it scared [Benjamin], and we started fighting.”

She said, “It escalated so far where he took pieces of mine — he took my computer, he took my Chanel bag, he took my hair piece…”

“How are you going to take someone’s hair?” Wright said.

“Maybe he had a date that night, and he put it on,” fellow cast member Chenoa Maxwell remarked.

Later on, Jones reveals she’s still staying at the apartment they were living together in, although it was in Benjamin’s name. “I’m staying at [our] apartment tonight,” she said.

“Honestly, I don’t know what is going to happen,” she explained before another one of her cast members agreed to let her stay for at least a weekend. The episode ends with Jones packing up and leaving the apartment in Harlem with her dog. Benjamin is not shown.

It’s not clear why the show ended and the episode with Benjamin and Jones’ break-up may not have aired, but at the end of the episode, all of the women are single, which may have contributed to the show’s end. A petition was started to bring the show back for another season, but it was hard to argue any of the women found love in the city.

Jones confirmed that all that she said on the show was true in 2017 to the New York Post, when Benjamin first ran for the state senate. She and her friends even dubbed him “the Harlem thief.”

“I am confirming that what was said on the show is true,” she told the tabloid. “I asked him to give it back. Why did he take it? That’s the question.”

“Being on the show was a largely positive experience for me. I was proud to support Tiffany’s non-profit, both on and off the camera, and I’m glad to call her a friend and a supporter in my campaign for state Senate.”

He still won his election that fall, but he never definitively denied the allegations.

Benjamin has formerly worked in Investment Management at Morgan Stanley, graduated from Harvard Business School with an MBA, and a bachelor’s degree in Public Policy from Brown University.

Benjamin was a managing partner at Genesis Companies, a real estate firm that sought to build more affordable housing in Harlem, when the show aired. In 2017 a co-investor in the firm sued, claiming that funds from the sale of one property were being given to investors at other properties, and Genesis’ funds were frozen by a court until arbitration took place.

It’s not clear what happened afterward, but weeks into his first senatorial term, Benjamin entered a paid consulting agreement with his former employer for at least a year, which he had to disclose to public ethics officials.

Prior to the show, though, Benjamin did have political chops. He had been a delegate for Barack Obama at the 2012 Democratic National Convention. In 2015, he earned recognition from Crain’s New York‘s 40 under 40 list, in part for “trying to persuade the developer to include an LGBT center and set aside half the proposed 300 units for low-income residents” in a new building.

Since his time on Love in the City, Benjamin has moved on to much different pastures than his reality show past would suggest. He became the chair of a Harlem community board before his election to the state senate. He has also hosted an LGBTQ forum for the National Action Network (NAN).

After taking office in Albany in 2017, he helped to champion the state’s Gender Expression Non-Discrimination Act (GENDA), New York’s ban on conversion therapy, and legislation to outlaw the use of anti-LGBTQ “panic” defenses, which blames victims of violence based on their identity.

Insiders noted that Hochul wanted someone that she could get along with and ally with for future elections. As Lt. Governor and President of the New York State Senate, albeit in a ceremonious role, she knew Benjamin pretty well.

“In my office, a picture of me and [Hochul] was the first picture that I had with a statewide elected official. We talk frequently and it’s been a great relationship over the last few years,” Benjamin said in an interview with the New York Times.

Neither Hochul nor Benjamin have yet to publicly comment.