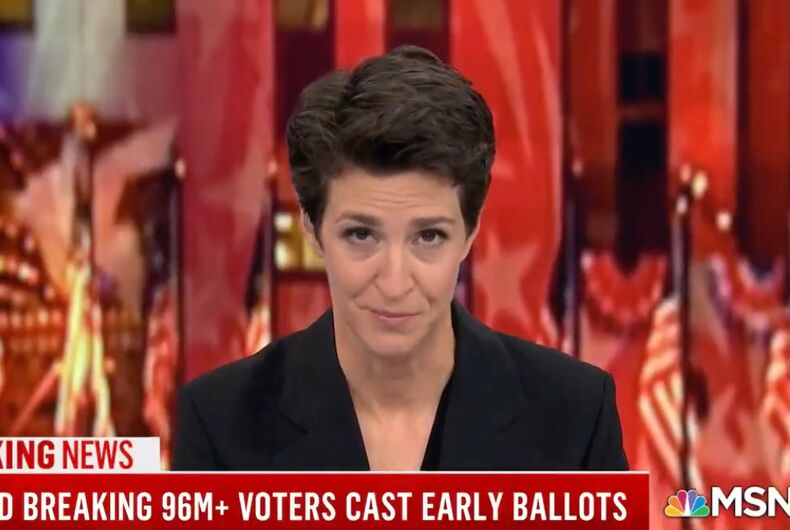 UPDATE: A person familiar with the matter tells LGBTQ Nation that “her schedule isn’t changing.” They reiterated that “in addition to hosting her show at MSNBC, Rachel will develop other projects in a new partnership with NBCUniversal.”

CNN is reporting that out MSNBC host Rachel Maddow will wrap up her eponymous show next year and will instead pursue other projects for the network and parent company NBCUniversal.

While rumors circulated that Maddow was considering an exit, she recently signed a new contract. The details were kept quiet until now.

The weeknight edition of her show will end in 2022 according to CNN, but she will still host approximately 30 specials and may produce a scaled-back weekly show for the network.

“NBC execs concluded that fewer days of Maddow was better than no days at all. She will start to host specials for MSNBC and, through her new contract, work on content across NBCUniversal,” reporter Brian Stelter tweeted, breaking the story. “So the key Q is: Who might succeed her?”

The changes at the network will also potentially see the exit of host Brian Williams according to CNN, a dramatic shakeup of the news network’s weeknight lineup. Both hosts Chris Hayes and Lawrence O’Donnell have recently extended their contracts to host their respective shows.

Maddow’s in-depth nuanced reporting has consistently remained the top show in the 9:00 pm EST primetime slot among her cable news competitors, including Cuomo Prime Time at CNN and Hannity at Fox News.

The show is also huge for MSNBC’s bottom line. In 2020, even after the pandemic ravaged advertising, advertising slots for Maddow still bought in over $66 million on its own.

Maddow has hosted the show since 2008.

But Maddow has also stretched herself thin, with multiple books, podcasts, and special coverage. She’s previously expressed a desire to spend more time with her wife. The two women live in Massachusetts and Maddow commutes to work every day in New York City.

Here's my thread about the buzz inside the network. First and foremost: Sources say the weeknight edition of "The Rachel Maddow Show" will come to an end sometime next year. But that's not the only X factor… https://t.co/hXMv5TLyOT

Re: Maddow, NBC execs concluded that fewer days of Maddow was better than no days at all. She will start to host specials for MSNBC and, through her new contract, work on content across NBCUniversal. So the key Q is: Who might succeed her?

MSNBC's other prime time hours are stable: Sources said 8pm host Chris Hayes signed a contract extension last year and 10pm host Lawrence O'Donnell signed a new deal earlier this year. But 9 is MSNBC's biggest hour of all. The highest rated, the most profitable. Keep an eye on 9.