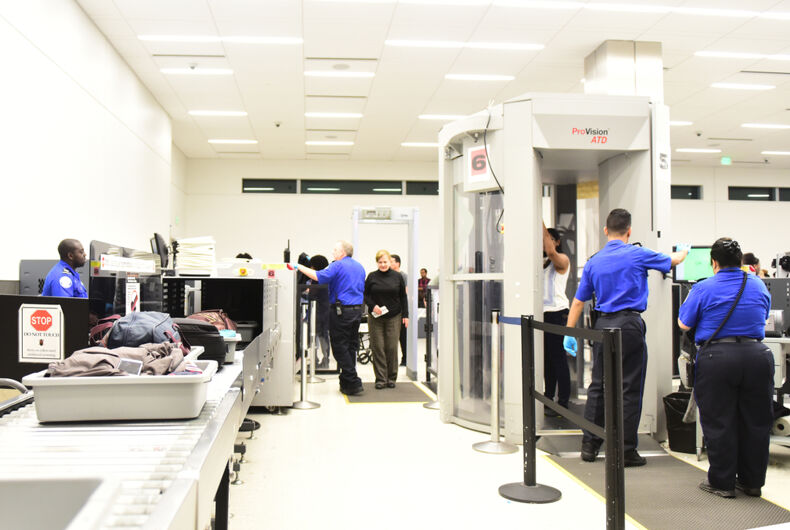 Trans people are speaking out on social media after a mother sued TSA for forcing her trans daughter to undergo a genital examination before she was allowed to board a plane.

Kimberly Erway filed suit against the TSA alleging that her then-15-year-old daughter Jamii’s rights – including her Fourth Amendment rights – were violated when TSA told her to go to a private room and submit to a genital examination after the scanning machine at the airport in Raleigh, North Carolina was set off because her body didn’t conform to what the machine expected of a girl’s body.

Her daughter said she felt “panic, anxiety, fear, racing heart, shortness of breath” because of the request and her amazing mom rented a car and drove them up to their final destination in New York instead of forcing her to undergo the genital examination.

While TSA is not commenting on the case, the lawsuit alleges that what happened was that a security agent pressed a button that said Jamii was “female” before she entered the scanning device, which TSA’s website says is pressed “based on how you present yourself.” The machine then flagged her genitalia and even after she explained that she’s transgender, TSA wanted to examine her genitalia.

The gendered system has been humiliating trans people for years, and there was an outpouring of support on social media for the lawsuit as trans people told their stories and explained why TSA needs a better system that isn’t based just on someone’s judgment of a stranger’s gender.

Actor Jen Richards called out TSA’s “sophisticated system of someone pressing a pink or blue button.”

For 15+ years now trans people haven’t been able to fly without the possibility of unwelcome exploration or our bodies because the TSA has a sophisticated system of someone pressing a pink or blue button and the making sure the scan conforms. https://t.co/U8Z0rCDocP

Author Casey Plett called out the “TSA-grope” and encouraged the family.

It occurs to me this is one of those things that happens to like…literally all of us (who fly).

Like I actually don't think I know a single transsexual who has been on a plane and hasn't had the TSA-grope at least once?

God bless that kid and her mother, give 'em hell https://t.co/mpDH46Cbhl

Advocate Ari Dennon noted that TSA could have run the scanner again for Jamii Erway but chose not to.

I have flown a dozen times since coming out as trans. Sometimes the scanner has flagged “anomalies” and sometimes it has not. When it has, agents have usually run the scanner again. I can’t think of a good reason they’d refuse in this case but I can think of many bad ones. pic.twitter.com/GkYvX8ZwiU

Others spoke out as well.

Not quite the same as I'm transmasc (and an adult) but this is an ongoing problem, my chest is an "anomaly" and I've had so many TSA dudes do searches ranging from a perfunctory pat-down to outright squeezing my breasts

Why am I not surprised that the people who keep slandering trans women as predators is really interested in looking at the genitals of teenagers?

I have a lot of flight experience and since I transitioned every time I have gone through the scanners Ive had to have a pat down. My choice is to either get scanned as female and then a female officer has to check my junk or get scanned as a man and have a dude grab my chest.

every single time i fly i just have to let myself be assaulted. the way i have to normalize it for myself is so disgusting

I once had a male agent & a female agent argue in front of me about which one was supposed to pat me down.

I remember flying for the first time summer 2019 and having to pretend the flight was making me nervous to all my friends when really I was deathly afraid of being publicly outed and the possible invasive TSA search. Hate so much this happened but love she is working to end it!