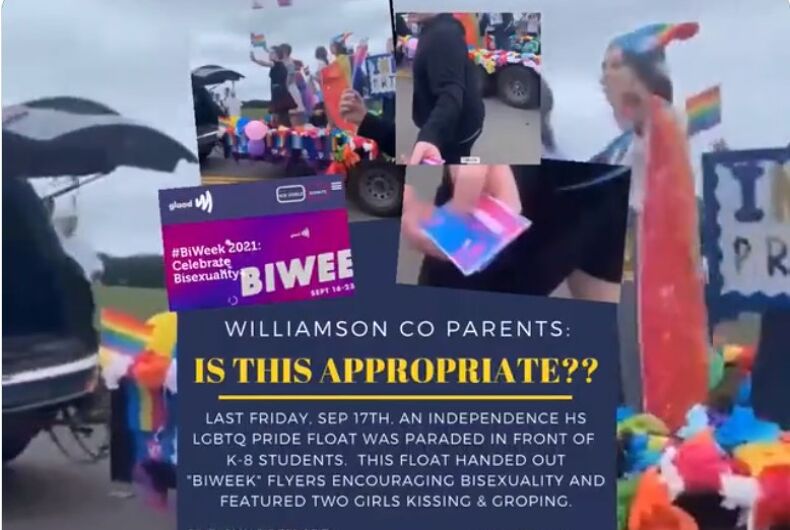 Some parents and a national anti-LGBTQ organization are freaking out over two teen girls who kissed during a Tennessee high school’s homecoming parade, accusing the girls of “making out” and “French kissing” when video shows that it was, in fact, a brief peck.

The national organization Moms for Liberty – which has gotten some attention this year for fighting mask mandates in schools – created a video that said that two girls were “kissing and groping” and “encouraging bisexuality” on a float during Independence High School’s homecoming parade.

“If a parent wants to take their child to a pride parade, that’s THEIR right, but to force an elementary school audience to view this??? Without warning parents? Seeing sexually lewd behavior — gay or straight — is traumatic for kids this young,” the group posted on social media.

The were referring to the float put together by Indy Pride, an LGBTQ student group at the school. They were handing out pamphlets about Bi Week during the festivities.

Moms for Liberty shared a video of the kiss… but even that video showed that it wasn’t “kissing and groping,” but a peck that lasted less than a second.

Moms for Liberty’s Williamson County, Tennessee chapter rallied parents to go to a school board meeting this past Monday with a video that asked the girls “IS THIS APPROPRIATE??” about the kiss. The group also claimed that “OUR CHILDREN ARE… EXPOSED TO SEXUALLY-ORIENTED AGENDAS” and “PORNOGRAPHIC CONTENT IN THE LIBRARY.”

Mom for Liberty was able to get some parents riled up.

“We don’t have to fight,” said parent Brett Craig at the Williamson County Tennessee School District Board meeting. “Let’s just keep this stuff in the house where parents make the decision and get back to teaching and doing school.”

“Support groups are fantastic, that’s great, but making out and French kissing on a float in front of our little children from kindergarten to sixth grade? Eighth grade? Uncalled for,” said another parent, according to WKRN.

Independence sophomore and Indy Pride president Spencer Lyst told the Tennesseean that Moms for Liberty’s campaign against their student group was “utterly false and disrespectful.”

They explained that the LGBTQ students were getting booed by other students during the parade, and that’s why the two girls decided to exchange a brief kiss.

“Now all these students have a target on their back,” Lyst wrote in a letter to the school board, saying that Moms for Liberty is putting LGBTQ students at risk for bullying and violence at school. “Some of these students had not come out to their parents yet, but now that Moms for Liberty shared their faces they are forced to share something that could change the course of their entire life as they know it.”

Earlier this year, Tennessee passed several anti-LGBTQ laws, several of which attacked students. One of the bills banned transgender girls from participating in school sports, another allowed cis students to sue if they see a trans student in the restroom at school, and yet another required schools to give parents 30-days notice if they are going to talk about LGBTQ people in school.

“As a parent, I find out when my child comes home what video they saw that day, not 30 days before so I can protect my own child from that,” Tennessee Rep. Ryan Williams (R) said in support of the school notification bill. “Our kids are young and impressionable, and what we allow in their minds is important.”

Helping a community in need