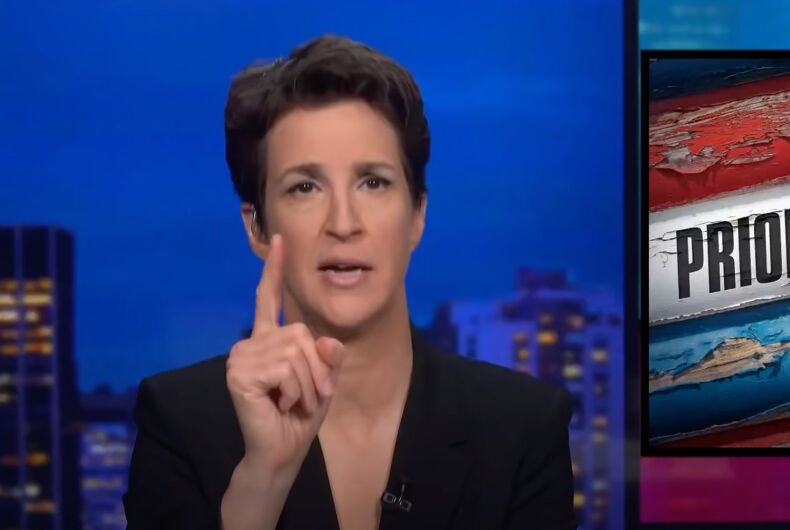 Out MSNBC host Rachel Maddow revealed on last night’s show that she had undergone successful treatment for skin cancer.

Maddow thanked her partner, Susan Mikula, for encouraging her to go to the dermatologist.

Related: What is queer theory & why is it important?

Maddow reported that Mikula noticed a change in a mole on her neck during a baseball game. After getting a biopsy, her dermatologist confirmed she had skin cancer.

“I had a few days off because I had surgery at NYU Langone on Friday,” the MSNBC host said. “They’re fantastic. They got it, they got all of it. I’m good. I have clear margins, the whole thing.”

She admitted that she’d “been blowing off my appointments forever,” and encouraged viewers to go get any moles like hers checked out regularly.

Skin cancer is the most common form of cancer in the United States. Caught early, it is rarely fatal.

“You do need to get this stuff checked at the doctor,” Maddow warned. “Do not blow it off.”

“I know I need to have everything checked, like, every five minutes from here on out because I do not want to get this again. Susan was right! She always is! I am going to be absolutely fine. I’m going to be totally fine.”

The weeknight edition of Maddow’s show will end in 2022, but she will still host approximately 30 specials and may produce a scaled-back weekly show for the network.

Get your skin checked!

Get on a schedule with your doctor. Schedule a check now, schedule the follow-ups.

Do not blow it off.

As doctor appointments go, this is the easiest kind. It doesn't even hurt. pic.twitter.com/NPPNMQFuzv

Pete Buttigieg on being a new dad: “I catch myself grinning half the time”