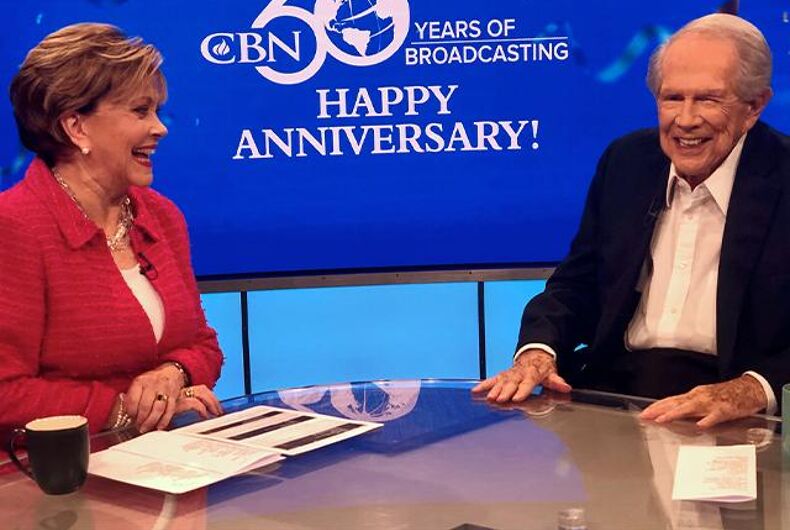 Televangelist Pat Robertson, one of the most vicious anti-LGBTQ Christian leaders for decades, announced that he will step down as the host of his popular 700 Club television show.

The far-right preacher started the Christian Broadcasting Network (CBN) 60 years ago today and launched The 700 Club in 1966. Robertson later made a fortune from a blood diamond mine in Africa that he purchased with proceeds from his televangelist grift.

Robertson also sold fitness equipment for a while, claiming that he could bench-press record-breaking weights in his 70s. He ran for president on the Republican ticket, but was beaten in the primary by former President George Bush.

A few months ago, the 91-year-old said he’s “planning on” living another 29 years.

He was widely mocked for his wild “prophecies” about the end of the world, election results, and foreign affairs.

As with most televangelists around his age who have died or retired, Robertson’s son, Gordon, will take over the family business. Billy Graham’s son, Franklin, took over his empire while Jerry Falwell’s son has crashed and burned running his father’s university and ministry.

In 1998, Robertson said that accepting gay people could result in hurricanes, earthquakes, tornadoes, and “possibly a meteor.”

The same year, he said that drag queen story hours means that what humanity is doing is “trying to do is stick our fingers in God’s eyes.”

“This was the original crime that led to the destruction of Sodom and Gomorrah, and the United States of America is on very slippery ground,” he said. “How is God going to bless America if we put our finger in his eyes repeatedly? And that’s what we’re doing. It’s not just some library that is going to be in trouble, it’s the whole population when God brings judgment.”

In honor of Pat Robertson's retirement, we're gonna repost this 2013 clip where he claimed that gay people wear special rings to infect others with AIDS. CBN edited it out of the broadcast and then tried to take down our videos to hide it. They failed. https://t.co/7PllSbDn1F https://t.co/qREKV46oxx pic.twitter.com/u5Lnqwa1IA

Pat Robertson, who's blamed gay people for hurricanes and Covid, is stepping down from hosting the 700 Club, an evangelical hate fest. Pat will be resuming his career as a ventriloquist's dummy, calling numbers at Mar-a-Lago bingo nites pic.twitter.com/0WADWnCyBe

Don’t Ask Don’t Tell is in the history books. The ramifications are still being felt.