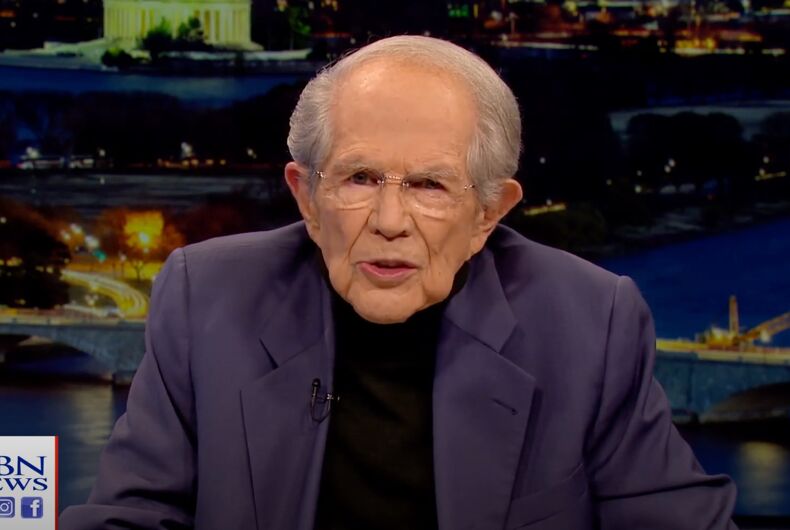 Video of Pat Robertson making wild claims about HIV – including the bizarre idea that gay men have rings that cut people’s fingers when they shake hands so that they can transmit the virus to unsuspecting victims – has resurfaced in light of media attention on Rush Limbaugh’s toxic statements about HIV.

The segment of The 700 Club where Robertson made the statements was so outlandish that the Christian Broadcasting Network (CBN) even had it removed from video-sharing platforms at the time, including YouTube and Vimeo. But it has come back.

In the 2013 clip, Robertson takes a question from a woman who was bothered to find out that she a man she was driving to the hospital regularly for her church had HIV. She said she had even switched churches because she felt she should have been told that a person living with HIV was in her car.

Robertson started out by saying that HIV can’t be transmitted by sharing a car – which is true – before he descended into conspiracy theory territory.

“There are laws now, I think the homosexual community has put these draconian laws on the books to prohibit people from discussing this particular infection,” he said, referring to laws that never existed anywhere.

“You can tell people you have high blood pressure, but you can’t tell anybody about AIDS.”

Later in his rant, he said, “I think people in the gay community, they want to get people. They’ll have a ring, and you shake hands, and the ring has a little thing where you cut your finger.”

“Really,” Robertson said. “It is that kind of vicious stuff, which would be the equivalent of murder.”

Video of the exchange made it into an episode of Majority Report with Sam Seder at the time, where it can still be viewed today.

Robertson responded to the controversy by saying he was “misunderstood.”

In my own experience, our organization sponsored a meeting years ago in San Francisco where trained security officers warned me about shaking hands because, in those days, certain AIDS-infected activists were deliberately trying to infect people like me by virtue of rings which would cut fingers and transfer blood.

I regret that my remarks had been misunderstood, but this often happens because people do not listen to the context of remarks which are being said. In no ways were my remarks meant as an indictment of the homosexual community or, for that fact, to those infected with this dreadful disease.

Yesterday, far-right radio host Rush Limbaugh died, and people remembered his “AIDS Update,” a regular segment on his show from 1989 to 1990 where he would play Dionne Warwick’s “I’ll Never Love This Way Again” and have “celebratory moments when another AIDS victim died,” according to reports about the segments at the time.

He later stopped doing the segments, but still defended them because “a behaviorally spread disease and [gay and bi men] attempt to absolve themselves of any responsibility for the actions they’ve taken.”

“So the AIDS Update is meant to offend them. Damn right.”

Chasten Buttigieg had the shadiest reaction to Rush Limbaugh’s death