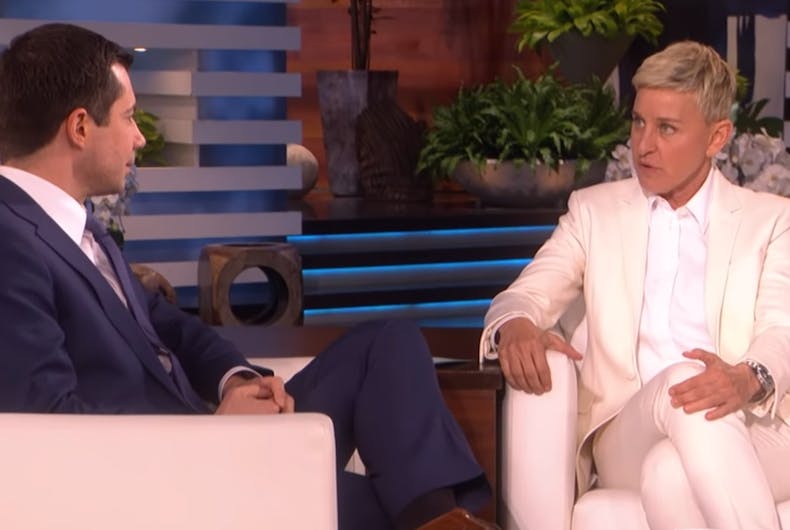 Pete Buttigieg appeared on Ellen’s show today and he called out Rush Limbaugh for implying that a real man is the “chest-pounding, loud-mouth guy at the end of the bar.”

Ellen read a quote Limbaugh last week: “How is this gonna look, 37-year-old gay guy, kissing his husband on stage next to Mr. Man Donald Trump?”

“How do you want to respond to that?” Ellen asked.

“Look,” Pete said, laughing. “I guess he just has a different idea of what makes a man than I do.”

“I’m not going to take lectures on family values from the likes of Rush Limbaugh, or anyone who supports Donald Trump. When I was packing my bags for Afghanistan, Donald Trump was working on season 7 of Celebrity Apprentice,” Buttigieg said, referring to one of the reality TV shows Trump has hosted.

“Since when is strength about the chest-pounding, loud-mouth guy at the end of the bar? The strongest people I know are not the loudest people. They’re the ones who have the deepest sense of who they are, what they value, and what they care about.”

“And one of those people, by the way, one of the strongest people is my husband, Brad Pitt,” he joked.

“I forgot my Oscar,” Chasten responded.

In the previous segment, Buttigieg talked about the Nevada Democratic debate earlier this week. He said the “heat of competition draws out our differences,” but broadly speaking, all the Democrats share the same broad values that set them apart from Donald Trump.

“There’s going to be one nominee,” he said. “Whoever it is, we have got to rally around that nominee if we want to defeat this president. And I’m committed to doing that, and I think we all are.”

He still distinguished himself from the other candidates, saying that Sen. Bernie Sanders (I-VT) “wants to burn things down in a way that a lot of Americans don’t identify with” and accused the Republican former mayor of New York City Michael Bloomberg of trying to “buy this” election.

In a later segment, Ellen asked Buttigieg which Democratic primary candidate he would most like to be stuck on a desert island with. Unsurprisingly, he didn’t say Sen. Amy Klobuchar (D-MN).

“I’m going to go with Bernie,” he responded. “Because we would never run out of conversation.”

Woman outed a gay man who didn’t pay her $5000 to keep quiet. She was murdered hours later.