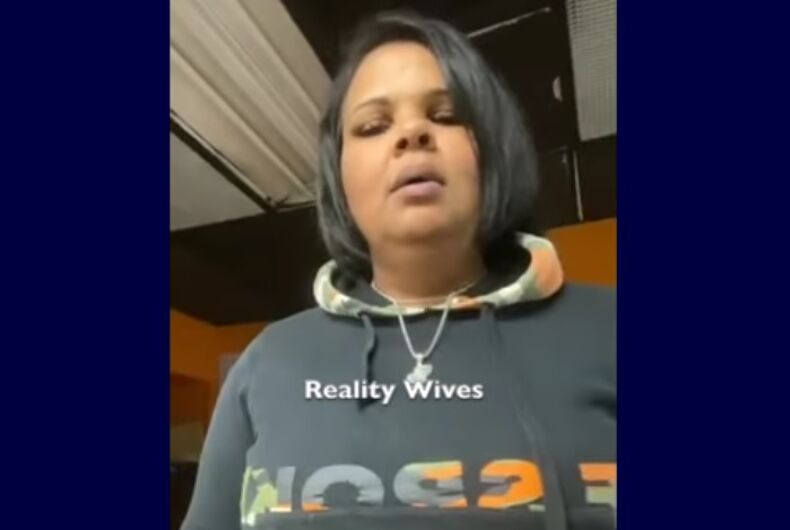 After posting a Facebook Live video in which she threatened to out a man if he didn’t pay her $5000, 40-year-old Indianapolis woman Jane Waughfield was shot and killed.

According to WISH TV, it remains unclear whether the video is connected to Waughfield’s death, though police do believe it was a targeted shooting.

In the seventeen-minute video, Waughfield said she walked in on a man she had sex with “a long time ago” when he was having sex with another man. She said she entered his apartment looking for her phone.

She felt horrified and repulsed. “I feel disgusted,” she said in the video. “I’ve been sick all day.”

Waughfield said she threatened to out the men if they didn’t pay her $5000.

She also referred to what they were doing as “hitting the fudge out the back.”

Waughfield said that she was then chased out of the apartment by the men.

Later in the video she said “today was your day to get exposed,” referring to the closeted gay man she walked in on. She compared herself to Moses when it comes to exposing truths.

CBS4 reported that Waughfield was shot Tuesday morning near the intersection of West 30th Street and Lafayette Road in Indianapolis.

Police believe the shooting is what caused her to crash into another car. Two other vehicles were also involved in the crash. Waughfield was the only fatality, though another victim was taken to the hospital in serious condition.

The coroner has not yet reported whether Waughfield died due to gunshot wounds or injuries from the crash.

“If something happens to me or something like that,” she said at the end of the Facebook live video, “At least you guys know the truth, okay? Because he’s quite upset about the change of events that has occurred at this point.”

Her death is the city’s 34th homicide of 2020. Waughfield was a mother of two daughters. WISH TV reported that friends and family released balloons in her honor on Wednesday.

Man attacked a gay couple in front of their parents