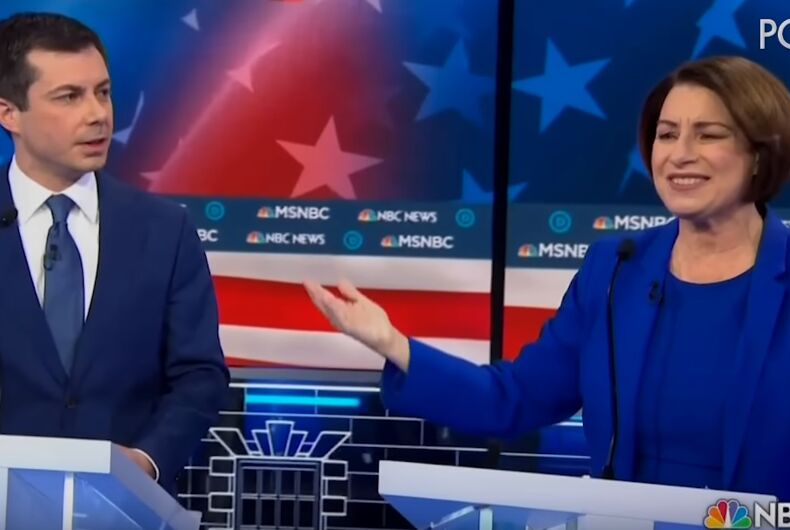 After the Democratic debate in Nevada, it’s time to examine a question that’s starting to percolate among gay men. Is candidate Amy Klobuchar homophobic?

Klobuchar has a solid record of supporting LGBTQ rights. But the look on her face whenever she attacks out candidate Pete Buttigieg is one that gay men know well. It’s the smug look of heterosexual superiority.

Related: Presidential candidate Amy Klobuchar sat down to talk about trans issues & what she’d do about them

Like Buttigieg, I grew up in Indiana. Klobuchar’s body language and barely concealed sneer is one I’ve seen dozens of times from wealthy white liberal women who talk the talk, but stumble when it’s time to walk the walk. It’s patronizing “tolerance” – until it’s not.

She has lobbed attacks at the other candidates but normally while looking at the camera and couched with phrases like “my friend Elizabeth” or “my friend Bernie.”

Even straight man Andrew Yang – who has years less political experience than Buttigieg and dropped out of the primary before the debate – got a “my friend” last night.

But when it’s time for her to turn her fire on Buttigieg, she faced him directly with a look that rich Midwesterners normally reserve for baristas who forget to make a heart in their milk foam.

Like women who hosted bachelorette parties at gay bars before marriage equality was legal because they wanted one last wild night, it’s doubtful Klobuchar even knows that we’ve seen her type before. Why would gays be upset by the bride’s “support”? Aren’t you glad we’re taking pictures of you like animals in a zoo instead of denigrating you? How ungrateful.

Indiana likes to claim its “Hoosier Hospitality” is what makes it a great place to live, a folk tale that’s utter baloney to any member of a minority group that’s lived in the state. Liberal “champions” and “moderate Republicans” have both made a show of their “tolerance” while voting for anti-LGBTQ legislation and candidates; just like how Klobuchar’s selling point is that she’s Midwestern-nice, despite tales from former staffers about her quick temper and abuse of employees.

During the debate as she went back-and-forth with Buttigieg over her inability to name the president of Mexico during a Telemundo interview, she got visibly angry.

Instead of explaining why a U.S. Senator on the Subcommittee on Border Security and Immigration doesn’t know the name of the president of a country that shares a 2000-mile border with the U.S. and is our nation’s third-largest trading partner, she turned passive-aggressive in her snide reply to Buttigieg’s hammering.

“I wish everyone were as perfect as you, Pete,” she said.

Buttigieg is an easy example of “Best Little Boy in the World syndrome,” a tendency for gay men to be overachievers in an attempt to mask or make up for being gay. They feel they need to earn the world’s approval.

The way Klobuchar treats Buttigieg is exactly why he is “perfect.” He’s had to politely smile his way past patronizing rich white women who are the first in line to shout about how much they love the gays while acting as the benevolent gatekeepers of acceptable society. It’s as phony as Hoosier Hospitality.

Klobuchar’s voting record is not actively anti-LGBTQ, but her constant jabs at Buttigieg as “inexperienced” and suggestions that he is “unelectable” are nothing more than a veiled attack on the historic nature of his campaign. No gay man has ever even run in this primary, much less won delegates and topped a few polls, and it should have stayed that way.

She doesn’t think he’s electable because he’s gay and it shows every time she looks at him. I’m not homophobic, I just don’t think queers can be treated with respect! It’s not me – it’s everyone else!

We know. We’ve seen that look a million times from women just like her.

Requests for comment from the Klobuchar campaign were not returned. Her campaign has never replied to any messages sent by LGBTQ Nation during the primary.