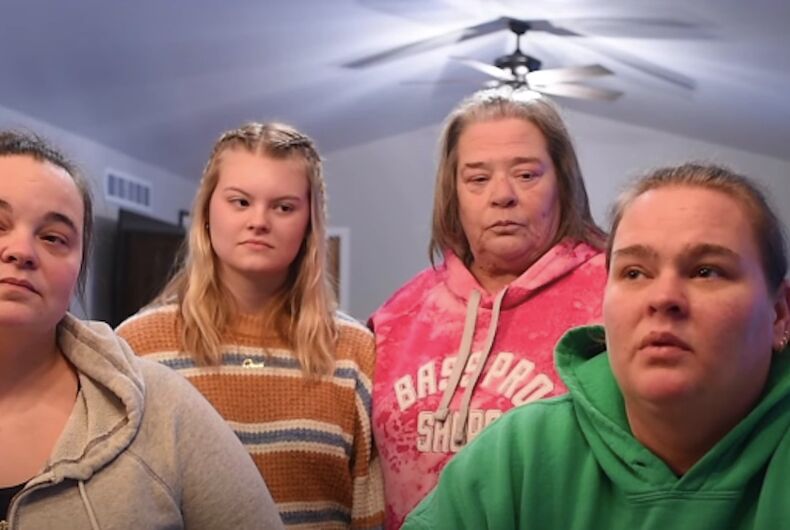 A married lesbian couple in Michigan say their daughter’s teacher banned her from writing a speech about marriage equality for fear that it might “offend somebody in the class.”

The school district is investigating the incident.

Related: Students thought their Mormon university was OK with gay people for a second. Oops.

Angela McDermitt-Jackson and Chris Jackson married in 2015 and are raising Destiny McDermitt, their 17-year-old daughter who is a junior at Hill McCloy High School in Montrose, Michigan.

Destiny’s teacher assigned her class a “Take a Stand Speech” in which students were told to speak in favor of or against a social issue important to them. Having two mothers, Destiny said she wanted to speak in support of same-sex marriage.

Destiny and other classmates claim that the teacher forbade her topic over worries it might offend other students. When Destiny asked whether the teacher could inquire if the topic offended her fellow classmates, the teacher declined her request.

The teacher also reportedly said she didn’t want to read or grade such a paper.

Destiny was so upset that she contacted her mother Angela while still present in the class. Later, Destiny wrote a letter complaining to school officials. Destiny has since been moved into a different class.

“[It] offended me because I have two moms [who] are married and I really thought it was inappropriate,” McDermitt wrote. Her mothers, aunt, grandmother, grandfather, niece, and younger sister all support her.

Montrose Community Schools Superintendent Linden Moore said school officials are investigating the incident and added that the teacher needed to be clearer about the assignment’s parameters. The school district has a policy encouraging teachers to embrace “controversial topics” as way to teach critical thinking skills.

“The teacher was thinking smaller and the kids were thinking bigger,” he told M Live, adding that “animal cruelty” was another banned topic.

Same-sex marriage is legal in all 50 U.S. states although a handful still have constitutional amendments banning it on the books. Approximately 8% of students in grades 9 through 12 identify as LGBTQ. Many, presumably, may want to marry at some point.