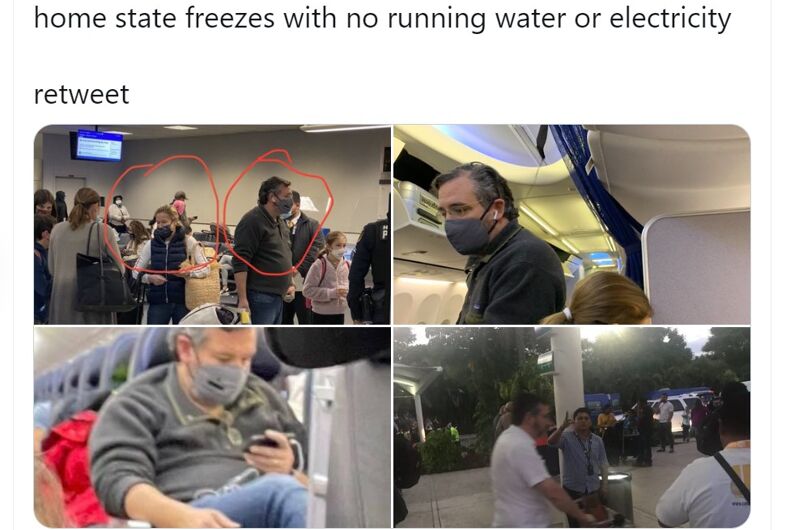 Twitter users are sharing pictures of a man who appears to be Sen. Ted Cruz flying to MexicoPhoto: Screenshot/Twitter

A terrifying winter storm has knocked out power and gas to millions, stranding Texans without heat, water, and shelter. Some state officials are scrambling to find solutions during the unusually cold weather, but Sen. Ted Cruz (R-TX) decided it was a good time to vacation in Cancun with his family.

After being busted by other travelers and shamed on social media, Cruz returned to the States and blamed his daughters for his decision to flee the state. His shamefaced reappearance didn’t stop the memes and jokes – especially after he was denied an upgrade to business class.

We’ve rounded up some of the best below, but there’s one obvious winner.

Blaire Erskine has gone viral before when she spoofed a Trump supporter appearing on local news, but her impression of Cruz’s Director of Communications had some folks fooled. The bar for “believable” has been dramatically lowered, after four years of the Trump administration.

Statement from Director of Communications for Sen. Ted Cruz pic.twitter.com/5cXIkTTZiW

“If you killed Ted Cruz on the floor of the Senate, and the trial was in the Senate, nobody would convict you,” Sen. Lindsey Graham (R-SC) famously said and Twitter proved the point. Social media was on fire all day as users mocked the conniving and hypocritical legislator.

To everyone mad at Ted Cruz: would you extend the same criticism to a MAN??? I didn't think so.

Please apply the Remain in Mexico policy to Ted Cruz

Texas state Rep. Chris Turner to CNN on Ted Cruz: "As far as I'm concerned, it would be fine if he remained in Cancun. He doesn't do anything for us in Texas or in Washington, so I don't know that we're gonna notice when he comes back."

It’s really only a problem if Ted Cruz comes back

Apparently, Ted Cruz has the same sloppy approach to packing for a one-night trip as he does for planning a coup. pic.twitter.com/a023HiGhmZ

And after Cruz blamed his daughters for the decision to light out for Mexico while his constituents struggled without water and electricity, it only got worse. The craven Congressman wore a mask with a Texas theme.

“With school canceled for the week, our girls asked to take a trip with friends. Wanting to be a good dad, I flew down with them last night and am flying back this afternoon,” Cruz said as he flew back.

brb gotta drop my middle schooler off at the Maldives

It's Blame Your Daughter At Work Day.

Pro tip: If you want to be a “good dad,” don’t let the president of the United States call their mom ugly and then kiss his ass.

The man doesn’t even drop his kids off at school I just pic.twitter.com/razOUuhp8X

FUN FACT: Rafael Cruz is the first US Senator to attempt to overthrow the federal government AND flee his state while his constituents were dying, within the same fiscal quarter.

Malcolm Kenyatta announces Senate campaign. He would be the first gay male senator.