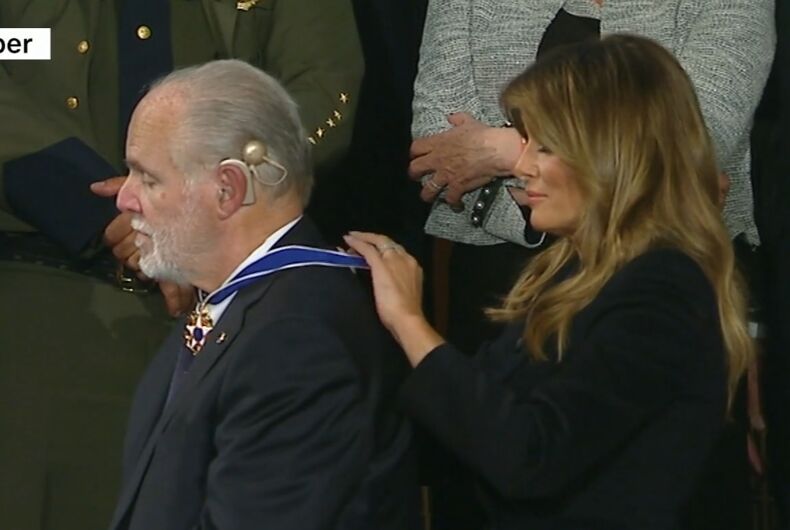 Far-right radio host Rush Limbaugh made it his life’s work since the 1980’s to make American conservatives more reactionary and hateful. A cigar smoker who denied it was harmful, he died today at age 70 of lung cancer.

One of the ways he made the world a worse place to live was a regular segment on his radio show called the “AIDS Update” where he would celebrate the AIDS-related deaths of gay and bi men. The segment was apparently so awful that even Limbaugh himself later stopped it and said it was “very insensitive to people who were dying.”

In the 1980s, gay and bi men were dying at an alarming rate from the virus at a time when even mentioning LGBTQ people was still very taboo. Then-President Ronald Reagan didn’t talk about the epidemic for years as it ravaged the community while government agencies dragged their feet in responding to it and religious leaders celebrated it as divine punishment for homosexuality.

It was in this context that ACT UP held a protest at St. Patrick’s Cathedral in New York City in 1989, protesting Cardinal John O’Connor’s opposition to safe sex education that could save people’s lives.

This upset Limbaugh, according to Ze’ev Chafets, who wrote in his book Rush Limbaugh: An Army of One: “He chastised ‘militant homosexuals’ for their disrespectful behavior and shortly thereafter began broadcasting irreverent and tasteless ‘AIDS Update’ segments introduced by Dionne Warwick’s ‘I’ll Never Love This Way Again.'”

He likely picked that song as another insult to the gay and bi men who had died; they’ll “never love this way again” because they’re dead.

While there does not appear to be an audio recording of the segment online at this time, other print media sources described the segment as “celebratory.” An LA Times article from 1998 described the AIDS Update segment as a “popular” feature on his show and said that he played the Warwick song, adding that he even said, “Gays deserved their fate.”

The 2001 Missouri Biographical Dictionary (Limbaugh was born in Missouri) called it “Limbaugh’s first major controversy” and described the “AIDS Update” segments similarly to other sources, even mentioning the song too.

“The homosexual community was offended by the segment and Limbaugh’s appearance on The Pat Sajak Show was disrupted by ACT UP, a group of AIDS activists,” the book said of the controversy, referring to a 1990 ACT UP demonstration. “Although zealous with his opinions on his radio show, Limbaugh refused to get involved in a battle with the group, and not long after, he discontinued the ‘AIDS Update’ segments and sent $10,000 to the Pediatric AIDS Foundation.”

Indeed, Limbaugh did express regret – without exactly apologizing – for the segments by 1990 and agreed to stop doing them.

“I engaged in an AIDS Update that missed the mark totally and ended up being very insensitive to people who were dying,” he said, according to Chafets’s book.

But his donation to the Pediatric AIDS Foundation can be understood as another slight towards the gay and bi men who were dying at high numbers at the time. A common way conservatives could express homophobia while pretending to care about HIV was to focus on the few children who caught the disease through blood transfusions or at birth, which allowed people like Limbaugh to appear compassionate while pointedly ignoring the largest groups of people who were dying of the disease.

It’s likely Limbaugh knew exactly what he was doing with that donation.

But this wouldn’t be the last time Limbaugh would attack LGBTQ people or people living with HIV. In 1989, he said that the best way to stop HIV was “do not ask another man to bend over and make love at the exit point. That’s what you don’t do.”

By the 2000s, marriage equality became the target of his disdain, much like it did for most conservatives, as making fun of people dying from disease was less socially acceptable than it was 10 years prior. But he still opposed LGBTQ equality until he died and repeatedly said that LGBTQ people were a threat to straight people.

Update: Snopes, the myth-busting website, has rated the existence and celebratory nature of the “AIDS Update” segment as “True.”

The website dug up a 1990 Cedar Rapids Gazette article on his rise to popularity and his regular segments making fun of gay men, lesbians, feminists, out retired Rep. Barney Frank (D-MA), and, of course, people living with HIV.

Limbaugh said that the intent of the segment was to offend people by making jokes about a deadly epidemic.

There is also, of course, the question of taste. AIDS isn’t funny. But Limbaugh doesn’t claim it is.

“The AIDS Update is, as is everything I do, politically oriented and based upon my reaction to what I consider to be extremism in the political mainstream by a group of people,” Limbaugh said in a recent telephone interview. He said his target is not AIDS victims but militant homosexuals who blame church and government officials for the epidemic, a practice he finds “outrageous.”

“It’s a behaviorially spread disease and they attempt to absolve themselves of any responsibility for the actions they’ve taken (then) suggest people who disagree with them get banned from television, like Andy Rooney,” he said.

“So the AIDS Update is meant to offend them. Damn right.”