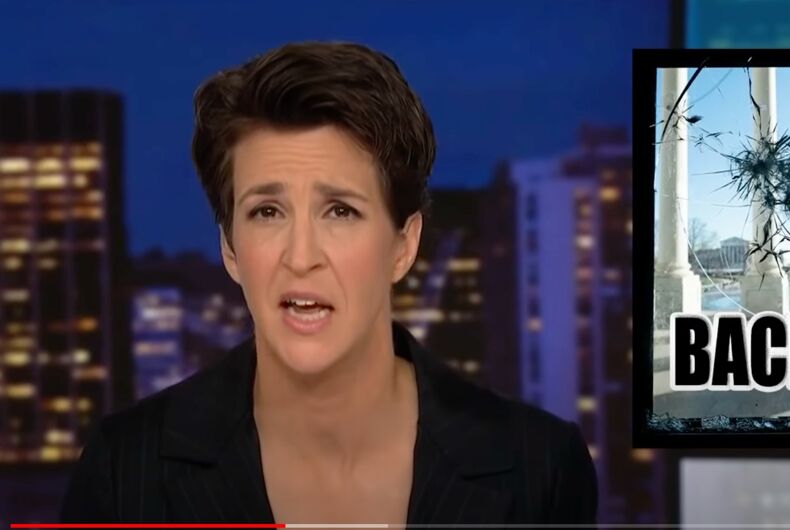 Rachel Maddow dropped a bombshell on air last night when she played audio recordings from the day of the MAGA riot on air shortly before Rep. Jaime Raskin (D-MD), a member of the select committee investigating the riot, joined the show.

The damning audio comes from Park Police radio recordings from earlier in the morning, well before reports of insurrectionists attacking police surfaced. Officers were forced to retreat inside the Washington Monument at one point – and the day was just starting.

“These are recordings that, among other things, show that as the National Park Police, that police force, was overwhelmed, they at one point had a number of their officers backed up inside of the Washington Monument for their own protection and that sort of extreme pressure on those police officers happened as early as 9:30 in the morning on the day of the Capitol attack,” Maddow reported before playing the audio obtained by the watchdog group Citizens for Responsibility and Ethics in Washington (CREW).

“Now, as far as I know, we had not previously understood the Trump crowd on the mall and on the Capitol grounds as early as the 9:00 a.m. hour was already fighting with police to the point of overwhelming them,” Maddow continued.

The audio includes messages from “about 20” officers trapped inside of the monument with someone they had just arrested. The officers requested assistance as the crowd surged through barriers and surrounded them.

The officers were told that if they could surround the prisoner and rush them toward the exit, two squads of police on horseback would escort them to the exit, but that they needed to “hurry” since the crowd was growing more and more restless and aggressive.

When Raskin joined Maddow on air, he told her that he hadn’t previously heard the recordings and pledged that the committee would investigate further. They are building a timeline of both the insurrection and the lead-up to it, finding out what connections the Trump administration had to the riot that started in the former president’s name.