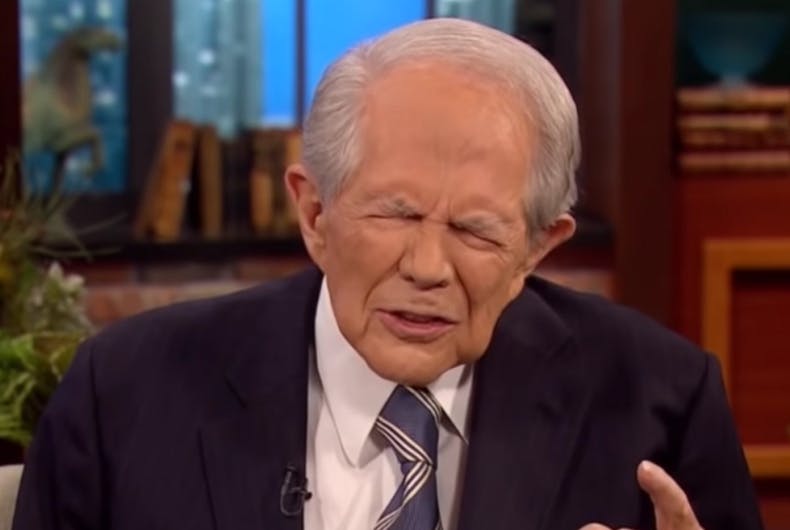 The Equality Act would, among other things, add sexual orientation and gender identity to existing federal civil rights legislation, banning discrimination against LGBTQ people in jobs, housing, public accommodations, and other areas.

Robertson had just interviewed Mat Staver of Liberty Counsel about the Equality Act on his show, The 700 Club. Afterward, Robertson urged viewers to call their representatives and tell them to vote against the Equality Act.

“This is a devastating blow to religious freedom and to the sanctity of America,” Robertson said, citing a common criticism of the Equality Act: if a religious store manager gets sued for firing a transgender employee or a religious doctor faces discipline for refusing to treat a gay person’s broken leg then their religious freedom has been violated.

But then Robertson went off the deep end.

“If you want to bring the judgment of God on this nation, you just keep this stuff up. You know, I was reading in Leviticus where it said, ‘Because of these things, the land will vomit you out.’ Vomit you out. I think God will say, ‘I’ve had it with America, if you do this kind of stuff, I’m going to get rid of you as a nation.’”

Pat Robertson goes full apocalyptic about the Equality Act: It will "bring the judgment of God on this nation," "the land will vomit you out," and God will "get rid of you as a nation" pic.twitter.com/xsBUFLPCnp