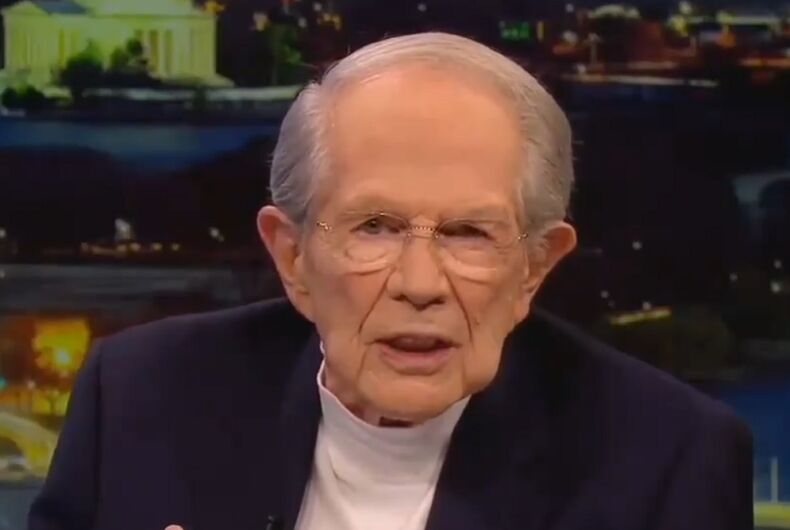 Robertson, 90, made the comments on his long-running show The 700 Club in a rant about athletes protesting police brutality and institutionalized racism, specifically citing NFL player Colin Kaepernick.

“Athletes used to be terribly admired by all of society,” Robertson claimed, “but their rating has gone to negative because of their association with Black Lives Matter.”

“Of course Black lives matter,” Robertson said. “But that legitimate thing has been hijacked by these radicals.”

Robertson accused Black Lives Matter of wanting to “destroy the nuclear family” and “destroying, essentially, Christianity as being racist.”

“They want to up-end the capitalist structure and destroy America.”

Robertson’s comments echo other white conservatives who have been arguing Black Lives Matter is secretly an attack on Christianity, capitalism, and heterosexuality instead of directly stating that they don’t believe that Black lives matter.

Sen. Kelly Loeffler (R-GA) said this past summer that Black Lives Matter is “founded on Marxist principles” and “called for the removal of Jesus from churches and the disruption of the nuclear family structure.”

And earlier this week, former Rep. Michele Bachmann (R-MN) said the anti-racism movement is “transgender Marxists, transgender Black Marxists who are seeking the overthrow of the United States and the dissolution of the traditional family.”

“This is exactly what a Communist revolution looks like,” she said. “They think they’re going to do it by electing Joe Biden.”