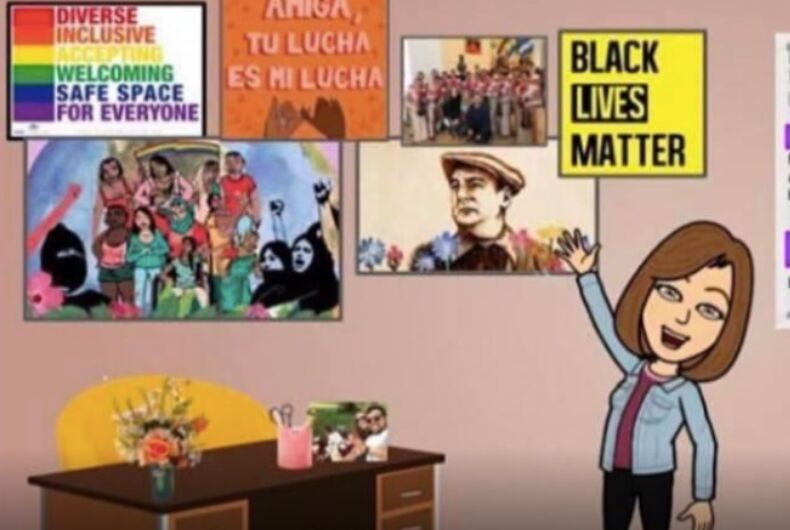 Roma High School, located near the border with Mexico, has put teacher Taylor Lifka on leave after a Republican politician posted a screenshot of her virtual classroom, which included a rainbow and a “Black Lives Matter” sign.

“This is from a public school in one of the counties in House District 31!” wrote Marian Knowlton on Facebook in a post last Friday. Knowlton is a Republican running for the Texas House in District 31.

“This screenshot was sent to me by a concerned educator who received it from parents of a student who the parents decided to remove from this teacher’s English Literature class.”

In the screenshot she posted, there is a poster that says, “Diverse, Inclusive, Accepting, Welcoming Safe Space for Everyone” in rainbow colors.

One poster simply says, “Black Lives Matter,” which Knowlton said is a message in support of a “radical Marxist movement.” Another says in Spanish, “Friend, your struggle is my struggle.”

Knowlton said that one of the posters has “a photo of radical protesters (one of whom looks like an ANTIFA member).”

“In addition, this teacher asks which pronoun they prefer!” Knowlton wrote. She did not explain how a teacher is supposed to find out their students’ pronouns without asking.

The screenshot also includes instructions from the teacher telling students to put their names and pronouns in the group chat.

“Our education system has been radicalizing our children for years and it continues to do so, from elementary through higher education,” Knowlton wrote in her post.

“This is not an isolated occurrence, it is a national pattern. A concerted effort to teach children what to think, not how to think. Leftist indoctrination.”

“Parents, I urge you to take a look at your child’s classroom, virtual or onsite.”

By Tuesday, the district said that the teacher in question was put on leave.

“After reviewing the complaints, the District is working closely with the teacher to find a resolution that will ensure all parties involved reach an outcome that best benefits the expectations of our parents and needs of our students,” the statement said.

“The teacher is not being reprimanded in any way for her work or decisions.”

The South Texas Equality Project (STEP) has started a Change.org petition to get Lifka taken off leave, which currently has 17,500 signatures.

“Please sign this petition to let the school district know that inclusivity and acceptance are not taboo ideas that deserve censorship; that high school students can and should be allowed to discuss the realities of the world instead of being sheltered inside a sanitized bubble; and that by reprimanding the teacher for trying to create a safe space for her students, the school is not being neutral, but is actively taking a stance that is antithetical to justice,” the petition says.

“In our current times, we are still in that struggle for that need for equality,” a representative of STEP told the Fort Worth Star-Telegram, adding that Lifka did not ask them to create the petition.

Knowlton’s Facebook page was made private after this story got media attention.