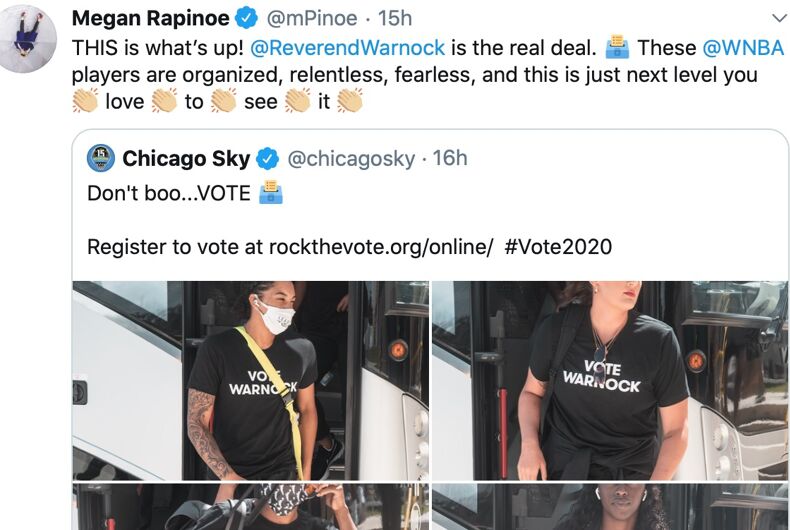 WNBA players are in open revolt against their team’s anti-LGBTQ, anti-Black Lives Matter co-owner and are supporting her opponent in an upcoming election… with some help from soccer star Megan Rapinoe’s partner, Sue Bird.

Related: These two WNBA players got married in a quiet, beautiful ceremony

Several Dream players wore “Vote Warnock” T-shirts ahead of a Tuesday game against the Phoenix Mercury (two Mercury players also wore “Vote Warnock” or “Black Lives Matter” T-shirts), a reference to pastor Raphael Warnock, who is running against Loeffler this fall as a Democrat.

We are @wnba players, but like the late, great John Lewis said, we are also ordinary people with extraordinary vision. @ReverendWarnock has spent his life fighting for the people and we need him in Washington. Join the movement for a better Georgia at https://t.co/hC8iF9urak pic.twitter.com/mvN5e9m4oO

Dream player Elizabeth Williams told ESPN that the plan for the T-shirts came because “for effective change to happen, there has to be policy changes.”

“If we’re going to sit here and talk about wanting justice reform, part of that is making sure that we have officials in office that understand that,” she said.

The WNBA has dedicated this year’s season to Black Lives Matter.

Sen. Loeffler sent a letter last month to WNBA Commissioner Cathy Engelbert complaining about the decision, saying that the league needs to respect the sensibilities of people who don’t “share the same political views” as the anti-racist movement. The letter also stressed that she owns part of a WNBA team.

“I adamantly oppose the Black Lives Matter political movement, which has advocated for the defunding of police, called for the removal of Jesus from churches and the disruption of the nuclear family structure, harbored anti-Semitic views, and promoted violence and destruction across the country,” she wrote.

In an NPR interview, Loeffler said Black Lives Matter was “founded on Marxist principles,” including “socialism.” She has resisted calls to sell her part of the team, including from the WNBA players’ union.

“When we realized what our owner was doing and how she was kind of using us and the Black Lives Matter movement for her political gain, we felt like we didn’t want to feel kind of lost as the pawns in this,” Williams said.

Williams told the New York Times that it was Sue Bird, a basketball player who has won three WNBA championships with the Seattle Storm, who came up with the idea to endorse Loeffler’s opponent in the Senate race. Bird is the partner of Megan Rapinoe, the captain who led the U.S. Women’s National Soccer Team to victory at the Women’s World Cup in France last year.

They had the T-shirts made and debuted them last night because the game was going to be broadcast on ESPN 2, and the players plan to wear the T-shirts at future games.

“We can’t really do anything about [Loeffler’s] ownership,” Williams said. “That’s not something we can control. We can control who we vote for.”

Rapinoe tweeted her support for the players.

Loeffler was appointed to the U.S. Senate in January after former Sen. Johnny Isakson (R-GA) retired for health reasons, so she doesn’t have a voting record on LGBTQ issues. But she has been vocal about her support for expanding religious exceptions, which usually include allowing businesses to discriminate against LGBTQ people if they claim they are motivated by sincerely held religious beliefs.

“I believe that people of faith should be free to make statements without fear of persecution,” she said in an interview last year.

She is facing Rev. Warnock in a special election this fall to complete the last two years of Isakson’s term.