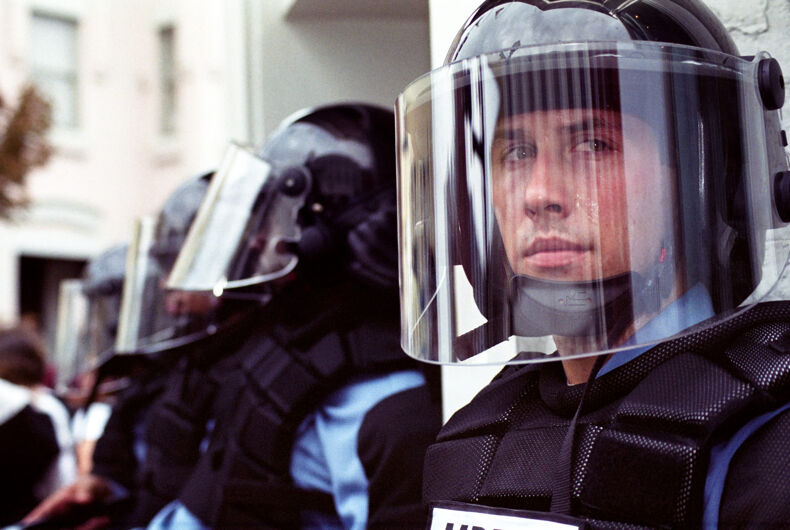 The Baltimore Eagle was raided by a COVID “SWAT team,” according to owner Ian Parrish. Parrish accuses drag performers from a competing bar for calling in a fake complaint to authorities that the bar wasn’t observing social distancing.

Hours before the raid, Mayor Barnard Jack Young (D) changed the city’s coronavirus restrictions on bars and restaurants to ban inside operations after 10 p.m. The bar was given a warning and allowed to shepherd patrons outside.

Related: Iconic “Serial Mom” house up for sale in Baltimore

Parrish says he warned authorities that the other bar’s employees were posting on Facebook that they planned to complain to the health department with fake allegations. Shortly after he did, officials in “black body armor” stormed through the door after refusing to have their temperatures checked at the door.

Some members of the task force team were not wearing masks, Parrish alleges. The Baltimore Social Club Task Force is made up of agents from the police and fire departments, liquor board, health department, and other city agencies.

Adam Abadir, a spokesperson for the Baltimore City Health Department, told the Washington Blade that the task force “inspection” was prompted by citizen complaints about the bar. He would not say who complained.

Instead, Abadir pointed to a flier advertising a “foam party” on the Eagle’s outside patio. The flyer tells patrons, “Throw on your harness and get naughty under piles of safe, antibacterial foam on our social distance patio. Thank you for respecting our COVID-19 guidelines.”

The presence of foam does not spread the virus.

“So that certainly was not a reasonable impetus for the raid. What was actually relevant about the theme was that it was a threat to a competing venue’s performers to the point they openly discussed in the very same Facebook post their plan to file false complaints – which they did; and again, I personally made the authorities aware of this prior to the raid,” Parrish said in an email to Baltimore City Council member Ryan Dorsey.

In an email to Maryland State Sen. Mary Washington (D), Parrish recounted that the officers refused to have their temperature checked before entry as required by the mayor’s order.

“’We’re the f**king liquor board,’ was their answer to my request,” Parrish wrote. “Then, the horde of the agents in body armor walked through me. I was ping-ponged from side to side as each agent physically pushed me from left to right and back about ten feet as they forced their way past me.”

“Not only did those agents abuse their authority by assaulting me, they put our patrons at risk by willfully ignoring State of Maryland COVID protocols, and some of them weren’t even wearing masks!”

“The SWAT style show of force put upon us was grossly out of proportion for the circumstances, it frightened our patrons to the point of them leaving, and the worst part of it was that we were subjected to this gross abuse of authority for absolutely no valid reason,” he told Washington.

Abadir did not address Parrish’s allegation about task force members not wearing masks or stopping for temperature checks, but clarified that agents “unfortunately must wear bulletproof vests/flak jackets for their protection.”

There have been no reports of bar or store owners opening fire upon Baltimore liquor board or health department employees performing inspection visits.

Matt Achhammer, a spokesperson for the Baltimore Board of Liquor License Commissioners, responded to Dorsey’s inquiry into the situation, telling the councilmember that “the location had major COVID violations.” He did not specify what they were.

The only possible explanation, Parrish says, is that patrons huddled together in fear as the agents stormed into the building dressed in body armor, wearing badges, and cursing.

US Marine who murdered a transgender woman was just pardoned