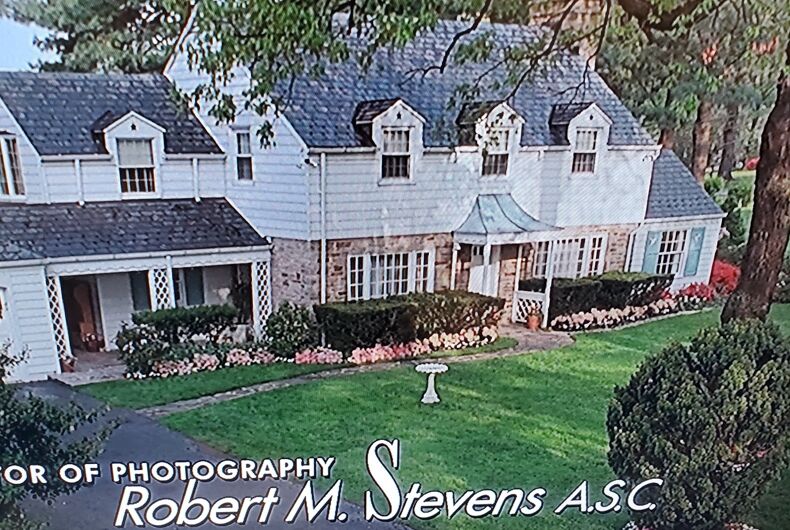 The house at 600 Lake Drive makes multiple appearances in the cult classic.

One of the most famous houses in John Waters’ filmography has just gone on the market. Not the Cocksucker residence, but maybe even better.

The Serial Mom house, where fictional homemaker Beverly Sutphin made her obscene phone calls and raised her unsuspecting family before launching a suburban murder spree, is now available in Towson, Maryland, the north Baltimore suburb where Waters shot his 1994 film, starring Kathleen Turner as a sweet-as-pie serial killer.

Related: John Waters is pretty much like the rest of us. He’s just trying to survive coronavirus.

Waters writes in his latest book that he conceived of Serial Mom as a “true-crime parody told in a mock-serious docudrama style about a lovable, sweet serial killer that could be your mom.” Or as it’s been described online, “pretty much…a genre of its own, the serial killer feel-good movie.”

As played by Turner, Serial Mom was irritated by the little things people do, such as chewing gum in the house or not recycling their trash or wearing white shoes after Labor Day, and that fed her urge to kill.

But her home was meticulous, the garbage was recycled regularly, and she always had a lovely dessert for dinner. “The only cereal I know anything about,” she says innocently, “is Rice Krispies.”

Houses have often played key roles in Waters’ films, from Babs Johnson’s trailer in Pink Flamingos to Tracy Turnblad’s row house in Hairspray to the mid-century rancher in Female Trouble where Dawn Davenport pushes the Christmas tree over on her mother when she doesn’t get cha-cha heels for Christmas.

To reinforce his plot about a seemingly normal family with a secret to hide, Waters needed the Sutphin residence to look normal, too.

In his 2019 book Mr. Know-It-All: The Tarnished Wisdom of a Filth Elder, Waters wrote that 600 Lake Drive provided the ideal backdrop for the story he wanted to tell:  “We found the perfect location for the Serial Mom’s family house,” he said, ”and the elderly male owner even let us continue filming when his wife died in the middle of the shoot.”

Using a conventional-looking house as the base of activity, Waters spins his tale about an outwardly happy homemaker who gets ticked off by one perceived slight after another and finally takes action.

Savoy Pictures was the studio that made the film. According to Waters, it grossed $7.82 million on a budget of $13 million plus prints and advertising.

Some of the film’s funniest moments live on as YouTube clips. One is the obscene phone call scene, where Beverly sits in her bedroom and makes a prank call to her neighbor, Dottie Hinkle.

Another memorable scene is when Turner, as Beverly, uses a different phone to bludgeon Hearst, playing Juror No. 8, for committing a fashion faux pas.

The Lake Drive residence has had several owners over the years but still looks like it did in the movie. Built in 1950, it has three bedrooms and two and a half bathrooms, with a two-car garage on a half-acre lot that backs up to a golf course.

It’s listed with Alex Hodges of Cottage Street Realty in northern Virginia. The price is $630,000.

Are Americans the stupidest people in the world?