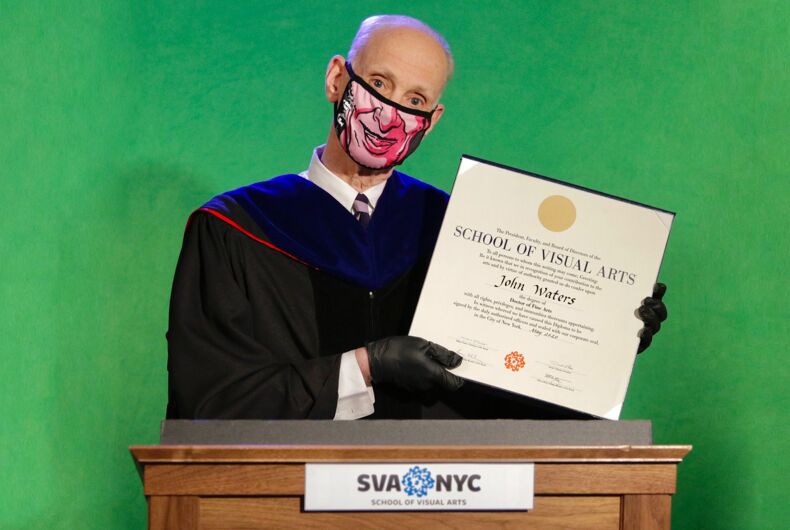 Some people dislike wearing face masks because they’re hot and ill-fitting. Others find they fog up their glasses and muffle their speech. But filmmaker John Waters has a different reason:

“Protective face coverings threaten my whole identity,” he said, “by hiding my mustache.”

Related: You have to see John Waters’ badass Christmas card

Despite those reservations about concealing his signature feature, Waters says, he does wear a mask, to protect others from COVID-19. He also wears gloves, even though they make him feel like Jack the Ripper or, worse yet, “an unemployed proctologist.”

“It’s not pretty, but who wants cooties?” he reasoned.

Waters shared his feelings about living in the age of coronavirus during a commencement address on Wednesday to the 1,280 graduates of the School of Visual Arts New York City (SVA), a group he called “the Coronavirus Class of 2020.”

It was one of the first times the Baltimore-based writer, filmmaker, visual artist, and gay icon has surfaced all spring after several high-profile speaking engagements had to be canceled or postponed due to the national lockdown.

Waters said he was asked to “energize” the SVA graduates as they head out into the real world in uncertain times. Besides trying to inspire the audience, he used the occasion to fill everyone in on what he’s been doing during the pandemic and how he’s coping.

He also veered off the main subject a few times, calling himself “Doctor Dirt” and warning at one point that “hacker trolls” might interrupt his remarks in an effort to “Free the Test Cheater Mom, Lori Loughlin.”

If they do, “there’s nothing we could do about it,” he admitted. “We’re trapped in a Grade Z horror movie with no way out.”

This was the third commencement speech Waters has given in recent years, but his first virtual speech in the middle of a pandemic. Instead of addressing a live audience at Radio City Music Hall, as originally planned, he spoke from his home in Baltimore. He appeared to have pants on.

Based on his remarks, it turns out that Waters is pretty much like everyone else, staying in and just trying to make the most of a terrible situation.

Waters confessed that it’s hard to be cheerful “when every morning you look at the headlines and they all basically say, You Are Going to Die Today.”

Still, he suggested that the graduates look on the bright side.

“If you do die tomorrow, at least you got your college degree, right? And suppose the end of the world is happening right now. Well, you won’t miss a thing, will you? Because there will be no more ‘’things. You will be the last graduating class in the world. Now that’s what I call unique.”

Rather than being overly upbeat, Waters gave the graduates a dose of reality, suggesting they embrace their inner-starving artist and tamp down any expectations of finding gainful employment anytime soon.

“You’re artists,” he reminded them. “There were never any real jobs awaiting you in the workforce anyway, were there? Even before this epidemic.”

Waters said he had hoped to copy a billionaire investor who recently paid off all the student loans of graduates from another college until he lost work due to the pandemic. He said he would have paid off “speeding tickets, upcoming beauty parlor bills, all court-ordered fines and, of course, any outstanding medical marijuana debts.”

He urged the graduates to adapt to the times and reboot themselves as needed.

“Artists are magicians,” he said, reverting to Mr. Know-It-All mode. “You can see what others cannot, have a secret language, the power to make others follow, a dress code all your own, and you can change history with one ludicrous idea. Plus, price-fixing is legal in your field. Count your arty blessings and march on.”

Toward the end of his remarks, Waters suggested that artists have a key role to play in ending the pandemic, at least metaphorically,

“Artists, you are the cure… the only people that can inspire the world to notice and then alter its destructive behavior,” he insisted. “You’re not the new normal, you’re the vaccine.”