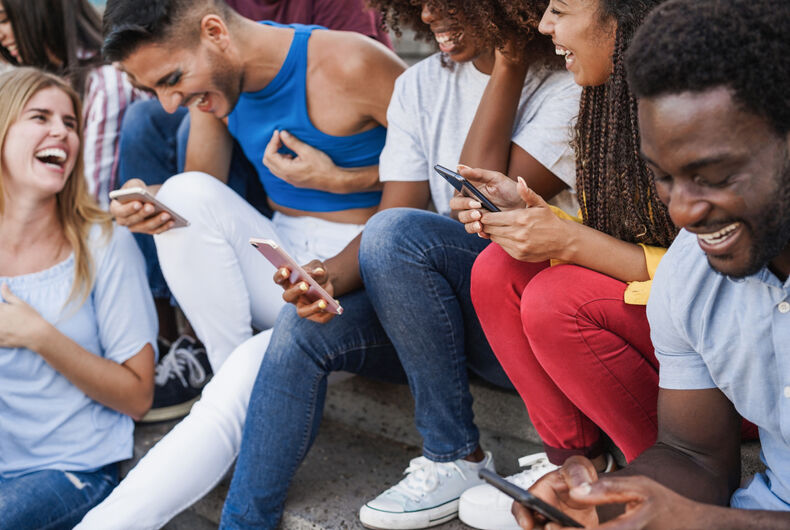 Social media isn’t only a place filled with troll-fueled vitriol; it can also be a source of joy, acceptance, and inclusion. Since its inception, LGBTQ people have used social media as a way to connect with one another and feel less alone. Today is exception.

Social media is filled with LGBTQ people using it to help make the world a better, more welcoming place.

You can vote now to tell us who you think should be LGBTQ Nation Hero of the Year.

The nominees are Chasten Buttigieg, for his combination of progressive tweets and epic clap-backs; Jasmyne Cannick, an advocate who helped bring a powerful, white serial killer to justice by getting people to pay attention; Aydian Dowling, who educates his followers on TikTok and Instagram about life as a trans dad and promoted protests against anti-trans laws; Manny MUA, a beauty YouTuber who used his massive platform to spread important vaccine information; and Zaya Wade, a trans teen inspiring others on Instagram.

Chasten Buttigieg became an instant Twitter sensation after his husband Pete announced his presidential camp. Fans loved Buttigieg for the genuineness and warmth of his posts – and also for the shade he gives when necessary.

From sweet messages to his husband to shutting down haters, Chasten continued to light up the internet this year.

In June, he had harsh words for the Republican Party as they claimed to celebrate LGBTQ Pride Month in the midst of orchestrating nationwide attacks on LGBTQ rights.

The GOP tweet, from Ronna McDaniel, Chair of the Republican National Committee, talked about how the party supports “measures that promote fairness and balance protections for LGBTQ Americans and those with deeply held religious beliefs”

Buttigieg wasn’t here for it.

“Those with ‘deeply held religious beliefs’ are often the parents who force their LGBTQ children out of the home and onto the street,” he wrote. “I’ve met with those kids. 40% of homeless youth in this country are LGBTQ. Re-visit your party’s platform before you open your mouth about #pride.”

Perhaps Buttigieg’s most iconic tweet came in February, when far-right, anti-LGBTQ radio host Rush Limbaugh passed away, after he had attacked the Buttigieges for kissing in public.

So when news hit the internet of Limbaugh’s death, Buttigieg posted a nice picture of him kissing his husband to Twitter with no comment. He didn’t say exactly why he posted that picture, but his followers understood the reference.

Activist, political strategist, and award-winning journalist Jasmyne Cannick, whose dedication to covering the case of convicted murderer Ed Buck no doubt helped lead to his conviction.

In July, Ed Buck, a gay white millionaire on trial for the deaths of two Black men, was found guilty on nine felony counts. Buck escaped justice for years despite his well-documented fetish for injecting methamphetamine into vulnerable Black men for sexual gratification.

After he killed his first victim in 2017, prosecutors declined to press charges. But Cannick was committed to “covering & chasing” Buck until he was ultimately arrested.

She covered his trial on Twitter to bring attention to Buck’s victims. She also founded Justice4Gemmel, an organization dedicated to seeking justice for his victims.

Buck will likely spend the rest of his life in prison – in part due to Cannick’s tireless advocacy on behalf of the victims, their families, and Black queer people.

Today is also the 4th anniversary of the death of Gemmel Moore. Below is a page from his journal.

Morning fam! Today Judge Schnyder will take up the issue of Ed Buck’s motion for judgment of acquittal. Buck’s attorneys want to toss the jury’s verdict on the claim that the evidence at trial was insufficient for a conviction. #edbuck #edbucktrial

Trans activist and life/fitness coach Aydian Dowling used Instagram and TikTok to share positive stories about being trans and life as a trans father. Dowling also uses his fitness expertise to help his followers feel more confident in their bodies.

“Now there is a realness as Trans people to want to change – to need to change our bodies,” he wrote in one post. “AND there is a balance that can be created between understanding, appreciating and enjoying where we are at – And trying to obtain a body that feels good when it looks back at us in the mirror.”

Dowling also uses Instagram to promote trans advocacy. For example, he shared his experiences attending a protest to support of trans youth in his home state of Texas. He is also the founder and president of Point of Pride, an organization providing gender-affirming programming to trans people.

But perhaps his most adorable posts are the photos he shares of the time he spends with his child. In one photo, the two of them are both taking a bite out of the same donut.

“One day,” the caption reads, “the world will realize that Trans people are literally just like everyone else-We are ALL here just trying to find our happiness in the world.”

Manny MUA has gained a follower base of over 10 million people across YouTube, Instagram, and Twitter. He uses his brand and media presence to be a positive role model for youth. He began his YouTube channel in 2014, and regularly posts make-up tutorials, first impressions and beauty tips.

He grew up in a Mormon family and was sent to “conversion therapy” when he came out to his parents in order to “reverse the effects of being gay.” His parents are now accepting of his sexuality and are actively involved in his brand.

“The more I grew on social media, the more I was able to show my family that I could take care of myself,” said Manny in a 2018 video. “I would show them my emails and DM’s from people saying how my story was helping other young men or women who want to wear make-up or express themselves.”

In May, Manny interviewed Dr. Anthony Fauci and President Joe Biden to help his followers learn more about the importance of getting vaccinated. Over 560,000 viewers tuned in to watch the ten-minute video.

In July, Manny also announced a new Snapchat series, Coming Out, in which he helps six LGBTQ people as they come out to the people they love.

“Coming out for me wasn’t super easy,” Manny told People, “so if I can help in any way, shape or form — help other people come out — that would be amazing.”

Zaya Wade – daughter of NBA player Dwyane Wade and stepdaughter of Gabrielle Union – came out last year and her family got national attention for their unwavering support.

Now Zaya herself, has stepped into the spotlight. Her Instagram account shows off her strength, confidence, and passion for fashion to her more than 450,000 followers.

Zaya even got to sit down with one of her idols, former First Lady Michelle Obama, on Instagram TV to talk about Obama’s memoir Becoming and Zaya’s advice for fellow teens.

At one point, Obama asked Zaya what advice she would give to others, to which the teen replied: “We all think that we thrive with people who are just like us, but I think getting a different perspective from someone else who isn’t like you really helps. That definitely helped me in becoming me and defining my truth.”

Vote now for who you think deserves the title of “Social Media Hero.”

Vote now for the Celebrity who Made us Proud