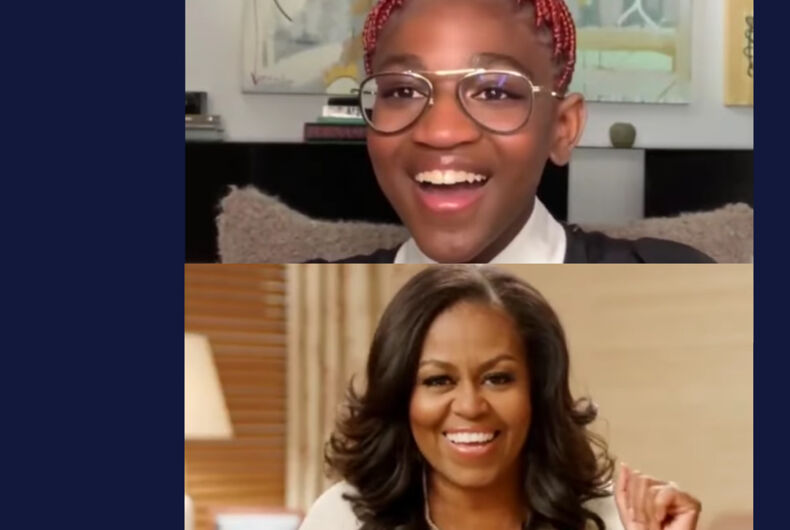 This week, trans teen Zaya Wade had a sit down with one of her idols, former First Lady Michelle Obama, and the pair talked about Obama’s memoir, Becoming, and Zaya’s advice for fellow teens.

The 13-year-old was understandably nervous when the video begins, but she powers through for 10 minutes, dishing on life and youth with Mrs. Obama. “I’m meeting an idol. I’m literally meeting an idol,” Zaya said, noting she’s been “preparing for this moment for so long.”

Related: The Wades are showing us that they are the family of our future

Obama jokingly thanks Zaya for “slotting me in between school, so I feel very special.”

Zaya asked for Obama to share advice guiding those “who want to be themselves and thrive, like you have and currently are.”

Obama, a mother to two girls herself, said back — “well, like you have and currently are.”

“I am just so proud of you, you know, being just an amazing role model and embracing your truth,” Obama beams.

“It does take time to know what yourself is, for young people. So, my first piece of advice is be patient with yourself, number one.”

She notes for teens, “this is the period of exploration, and sometimes we put too much pressure on teenagers to know who you’re going to be.”

Obama then asked Zaya what advice she would give to others, to which the teen replied: “We all think that we thrive with people who are just like us, but I think getting a different perspective from someone else who isn’t like you really helps. That definitely helped me in becoming me and defining my truth.”

Zaya brings up a friend, “who was very different, and no one really thought we’d be good friends.”

“Now, she’s my best friend of four years.” She notes the friend “really helped me become a better… myself.”

Obama’s memoir Becoming are being re-issued in paperback and in young readers’ editions this month.

Zaya’s parents, Dwyane Wade and Gabrielle Union, have supported her as she has come to understand her identity. They both attended Pride with Zaya in June 2019 and Zaya’s father stood up for her when Instagram users criticized her for wearing a crop-top and painted nails in early December 2019. That same month, he discussed the importance of supporting queer children on a podcast in December 2019.

The elder Wade first discussed Zaya’s transition on the Ellen Degeneres Show, where he said, “We are proud parents of a child in the LGBTQ+ community, and we’re proud allies as well, and we take our role and responsibility as parents very seriously.”

Zaya’s mother and brother have been supportive as well. Union regularly shares social media posts praising her daughter and thanking others for their support.