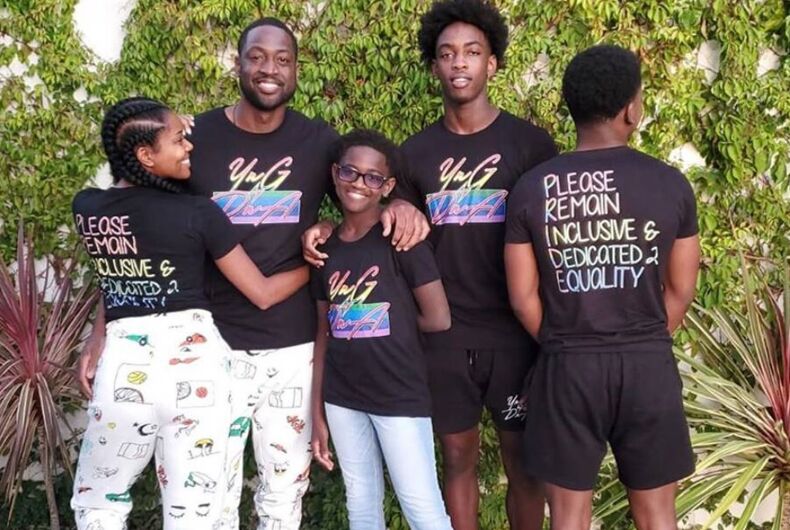 This month, Dwyane Wade and Gabrielle Union announced publicly that their daughter, Zaya Wade, has come out as transgender and decided to use she/her pronouns. This event followed months of the Wade family participating in numerous pride-related events and supporting Zaya through criticism for her appearance.

Dwyane has admitted subsequently that he himself had to learn from his past conceptions of gender and identifying as trans. “I’ve been a person in a locker room that has been a part of the conversation that has said the wrong phrases and the wrong words myself,” he told Robin Roberts in an interview on Good Morning America.

Related: Arena full of basketball fans bursts into applause when Zaya Wade is shown on the jumbotron

Not everyone has taken the same growth that Dwyane, or others, have. Prominent Black celebrities, such as Serayah, Young Thug and Lil’ Boosie questioned if Dwyane and Union were right to publicly support their child’s decision. Serayah, in particular – who portrays a bisexual Black woman publicly scandalized for her sexuality on FOX’s TV show Empire – publicly questions the “more important” conversations that could be had, rather than their child’s gender identity.

Since he’s a pro-basketball player, Dwyane’s public perception as a Black masculine role model made him the brunt of criticism for others’ transphobic attacks and outcries against Zaya’s decision to publicly come out. All of the Wade family, from Gabrielle to Zaya’s brother, Zaire, showed their love and appreciation for having Zaya in their lives – but in African-American communities, Black men are expected to be diligent as fathers to “protect” their homes from the incursion of femininity. This is no more common than queerphobia or transphobia in other communities, but rarely is that notion so openly challenged by an entire Black family.

Unfortunately, it’s no wonder that people have a problem when the Wade family actively champions Zaya’s right to self-identification – because for so long, society has denied us all that possibility, especially for Black people.

As of 2019, the Human Rights Campaign (HRC)’s Black and LGBTQ Youth Report has found that over 77 percent of LGBTQ African-American youth have heard something negative said about their community within their families. Similarly, only 19 percent have stated they can definitely be themselves at home.

These numbers fail to convey the devastating experiences that Black LGBTQ youth entails, which is unnerving – especially in the shadow of Nigel Shelby’s suicide in 2019. The 15-year-old Alabama native experienced depression due largely to the bullying he faced at school. His death was reported across the country and many reacted to the tragedy with the same heartfelt confusion that should be expected when a child full of potential leaves before he can enjoy the precarious gift of life.

For Black LGBTQ people, the hatred and lack of support Shelby faced is all too common. As a Black person, we are shown through our culture that “family” and kinship, which persists across an unsevered global network, is beloved. So when you’re isolated by that family in way that LGBTQ people typically are, kinship becomes an all too common wound. A wound that the 80 percent of African-American youths facing depression. and the 71 percent who report absolute hopelessness, are too familiar with.

It is disheartening, to say the least, when the power you’ve always been told to feel entitled to as a Black person is denied constantly by the community who has been raised to love you unconditionally.

In the same HRC report, 47 percent of the study participants have been targeted by their family members — particularly taunted or mocked — because of their identity within the LGBTQ spectrum. While this discounts the majority 53 percent of families who do not engage in overt taunting, it does not replace the level of protection and inclusion LGBTQ teens could potentially receive in identity-affirming households. Only 29 percent of Black teens state their family members are involved in larger pro-LGBTQ+ events, like the Wade family has been.

For people like Lil Boosie, Young Thug, and Serayah, the idea that accepting LGBTQ people would be tantamount to ruining families and masculinity not vanishing anytime soon. That makes the efforts of Black families like the Wade’s invaluable to Black youth. People who do not assume their understanding of the world, or their children, supersedes love or kinship ones are communicating their needs serve to reinforce the nature of family.

Is voter supression going to prevent trans citizens from exercising their rights?