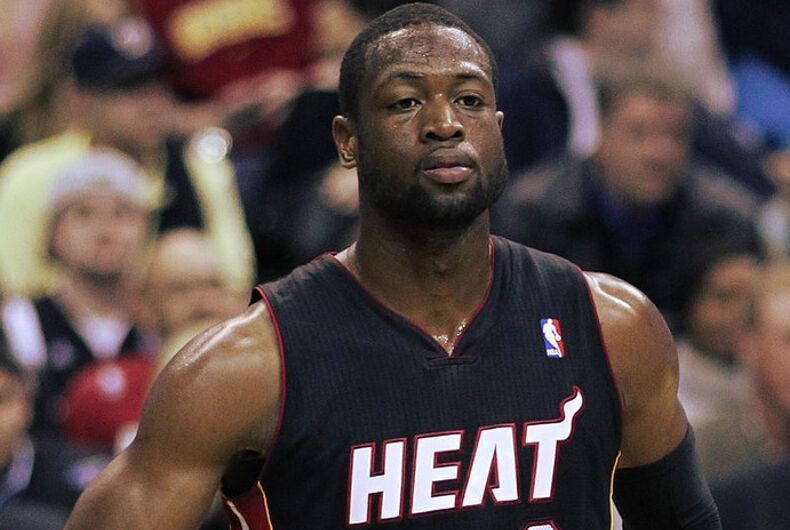 NBA player Dwyane Wade gave a stirring speech about showing support and love for his gay son and growing as a man by witnessing their strength.

Wade was talking with Matt Barnes on the podcast All the Smoke, when the host brought up Wade’s 12-year-old son Zion.

Related: NBA star Dwyane Wade says it’s ‘my job as a father’ to support his son at Pride

Several weeks ago, Wade and his wife Gabrielle Union posted a Thanksgiving picture of their family to Instagram, where Zion was dressed in what some of their followers considered feminine clothes. And those commenters made their hatred of difference known.

Wade stepped up on Twitter to defend his family, saying, “Stupidity is a part of this world we live in.”

“First of all, you’re going to talk about strength and courage?” he asked rhetorically. “My 12-year-old has way more than I have.”

He said that he already understood that Zion would face negativity in life as a Black American and even more if they are gay, so he uses his platform to help make the world better for everyone.

“I understand that I’m speaking for a lot of people who don’t have the same voice that I have, as a father,” he said. “I’m even speaking for my 12-year-old right now because I haven’t allowed them to sit in front of a microphone yet. But I’m speaking for so many others in the LGBTQ+ community. So for me, it’s just my version of supporting.”

Wade started to notice that his son wasn’t like other boys when Zion was three.

He also had a message for those who hate LGBTQ people: “Look at yourself.”

The relevant exchange starts at the 30-minute mark.