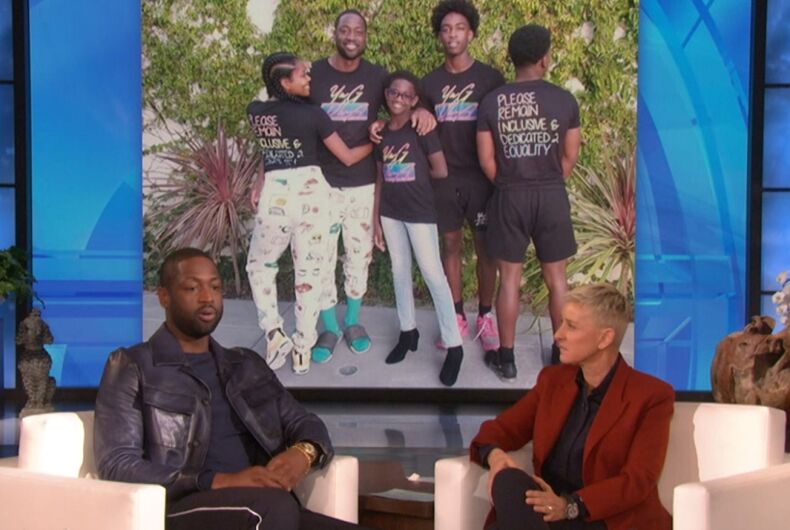 Dwyane Wade on Ellen's show in front of a photo of his family at Pride.Photo: Screenshot/Ellentube

NBA player Dwyane Wade’s support for his child has been making headlines over the past year, and now he told the world that his daughter Zaya is a transgender girl.

“Me and my wife Gabrielle [Union, the actress], we are proud – and I say proud – parents of a child in the LGBTQ+ community,” Wade announced on the Ellen Degeneres Show.

Related: How improv helped this ‘Whose Line Is It Anyway?’ star accept his trans child

He said that it just happened one day that his 12-year-old child “came home and said, ‘Hey, I want to talk to you guys. Going forward, I want to live my truth. And I want to be referenced as ‘she’ and ‘her’ and I would love for you guys to call me ‘Zaya.'”

Wade said that he and Union immediately supported Zaya.

“Now it’s our job to, one, go out and get information, to reach out to every relationship that we have,” he told Ellen. “My wife reached out to everybody on the cast of Pose.”

Ellen asked if he worried about the hatred his daughter will face in the public eye, and Wade said that it’s really his job as a parent to help her find her “voice.”

Ellen told him at the start of the interview that more LGBTQ people need parents like him.

“Every parent should be what you’re being right now, which is unconditionally loving your child and supporting your child in whoever they are,” she said.

Last year, Wade attended Pride with Zaya and the rest of the family and defended her when he got negative comments on social media.

Later in the year, he posted a Thanksgiving family picture to Instagram and followers noticed that Zaya was wearing stereotypically feminine clothing. Wade again stepped up to defend her and LGBTQ youth: “As a parent my only goal is that my kids feel that I see them, love them, and support them,” he tweeted.

In December, he discussed how he was supporting Zaya at greater length in an interview and he referred to her with “she” pronouns a few times.