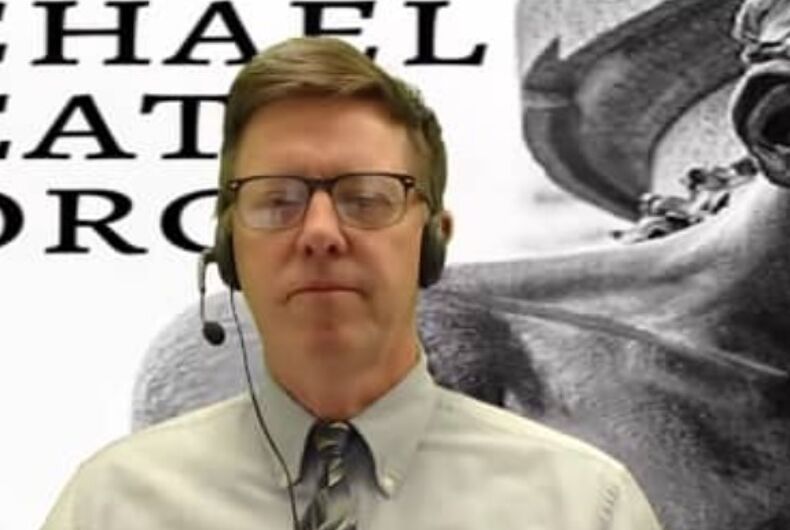 Christian activist and pundit Michael Heath stirred controversy last week when he announced the launch of a “F**ggots Are Maggots” tour of all 50 states.

Now, a week later, Heath has called off the events because Pope Francis and hate group leaders won’t help him.

Related: Gay Hollywood agent sent a sexist email to his assistant so she put him on blast

“For a bit over a week I’ve been salting my COLUMNS with the English words ‘f**got’ and ‘maggot.’ I started doing it with a promise that I’d do a World Tour because it is a fact that F**gots are Maggots,” he writes on his website. “I probably won’t do the Tour. Not because I don’t want to do it. I won’t do it because Tony Perkins, Tim Wildmon, Franklin Graham, Jim Dobson and Pope Francis won’t help me.”

While Heath’s words are more hateful than even most rightwing organizations’, he made sure to point out that he was inspired by Donald Trump.

“The tour is inspired by the work of Donald Trump,” he said when announcing his tour.

He stressed that “this isn’t satire,” explaining that he supports Trump specifically because Trump engages hateful discourse and bullying.

“I started supporting Donald Trump early in the 2016 primary for one reason: he insults his enemies. He makes things personal that deserve to be personal. The decades of leftists being the only ones allowed to make everything personal are over. It’s long past time for WASP manners to take a back seat to the truth. Long past time.”

Heath continues his announcement with bizarre claims that the Holy Spirit told him to use the words “f**gots” and “maggots,” and religious exhortations against homosexuality.

He headlined his cancellation announcement with “I Was(n’t) Kidding” and baldly asserts that God told him to make up the lie that the tour would happen.

“What… you think it doesn’t take money and institutional support to do a fifty-state tour before the Presidential election?!” he writes. “You know it does.  I knew that when I wrote the COLUMN.  I didn’t care when I wrote it whether I could fulfill the promise.  I felt a nudge of the Holy Spirit telling me that I should write and publish it anyway.”