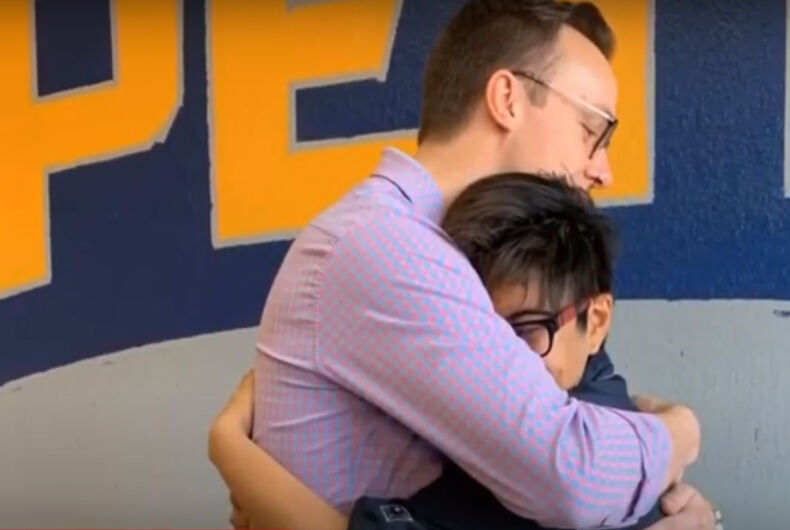 Chasten Buttigieg slammed Republican Senate candidate J.D. Vance after the Ohio Republican criticized Chasten and his husband for not having children even though they’re going through a difficult adoption process.

Vance said that Democratic politicians are bad because many don’t have children, saying that they are “leaders of our country… who don’t have a personal and direct stake in it via their own offspring.”

He named several Democrats including Vice President Kamala Harris (who is a stepmother to two children), Rep. Alexandria Ocasio-Cortez (D-NY) (who is 31-years-old and not a party leader), and Secretary of Transportation Pete Buttigieg – Chasten’s husband.

Chasten and Pete got married in 2018 and almost immediately Pete started his presidential primary campaign.

The couple has been talking publicly about wanting to have kids since early 2020 when Pete told People, “The next chapter in our personal lives is going to be about kids.” Even earlier in their relationship, well before they were married, they were already talking about wanting kids, according to Chasten’s memoir I Have Something to Tell You.

And a profile that came out yesterday in the Washington Post says that they’ve been having trouble adopting in the past few years. For example, two weeks ago they were notified of a birth mother who wanted to put her child up for adoption. Chasten and Pete dropped everything to travel to her state when they got the call. but then she changed her mind.

“It’s a really weird cycle of anger and frustration and hope,” Chasten said. “You think it’s finally happening and you get so excited, and then it’s gone.”

He said he wants to tell his kids one day: “We tried so hard for you. We waited so long for you.”

So that’s what was on his mind when Vance said that they shouldn’t get the same number of votes as everyone else because they don’t have children: “The Democrats are talking about giving the vote to 16-year-olds. Let’s do this instead. Let’s give votes to all children in this country, but let’s give control over those votes to the parents of the children.”

Vance’s comments were echoed on Fox & Friends, where co-host Rachel Campos-Duffy said it’s “absolutely true that people like AOC, Pete Buttigieg — you can name the left-wing politicians, people who think that we should legalize marijuana because they don’t have kids and they don’t really have a stake in what that looks like.”

Chasten called out Vance on Twitter for being insensitive to people who want kids and are having trouble having them, as well as implying there is something wrong with people who don’t want children.

“Bringing a child into this world can be a long, difficult and often heartbreaking process for any family,” Chasten wrote. “Shame on [Vance] for this tactless take. As a father, he should know better. As a wannabe Senator, it’s clear that empathy isn’t his strong suit.”

“And, of course, it goes without saying. If you don’t want to have kids – don’t. That’s your business and it doesn’t make you any less American.”

And, of course, it goes without saying. If you don't want to have kids – don't. That's your business and it doesn't make you any less American.

Vance isn’t apologizing. He called Nobel Prize-winning economist Paul Krugman “one of many weird cat ladies who have too much power in our country,” a reference to how Krugman doesn’t have children.

Paul Krugman is one of many weird cat ladies who have too much power in our country. We should change this. https://t.co/uylzHsm6WT

Istanbul is an amazing must-see city. It also completely broke my heart.