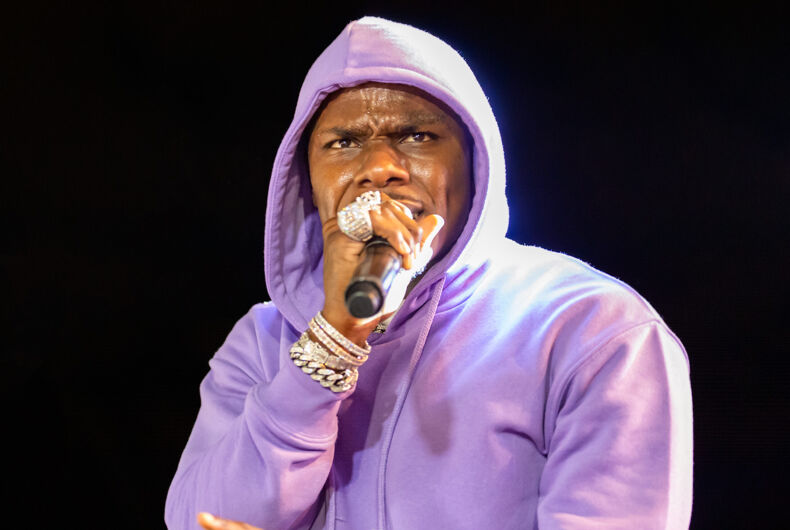 Grammy-nominated rapper DaBaby is facing criticism for his set at the Rolling Loud Miami festival, which was highlighted by a rant condemning people “with HIV, AIDS, or any of them deadly sexually transmitted diseases, that’ll make you die in two to three weeks.”

The random speech came right after DaBaby had a shoe flung at him from the audience. It was right before he welcomed his collaborator Tory Lanez to the stage, which has earned both criticism due to allegations that Lanez had shot another rapper, Megan thee Stallion, in the foot. DaBaby’s comments and relationship with Lanez have earned him ire since.

In an apparent attempt to hype up the crowd between songs, DaBaby told the audience, “If you didn’t show up today with HIV, AIDS, or any of them deadly sexually transmitted diseases, that’ll make you die in two to three weeks, then put your cellphone lighter up.”

“Let’s be real about this shit,” a different voice is heard saying in the background.

I just know you mf lying… GET HIM pic.twitter.com/fmYjxTlGZM

The remarks went viral, as well as another moment from the show right before, when an audience member threw a shoe at DaBaby.

It immediately earned him comparisons to former President George W. Bush, who had two shoes flung at him at a press conference in Iraq in 2008, toward the end of his presidency.

“Who the fuck threw that motherfucking… busted ass, god-damn Adida?” he asked right after dodging the shoe. He would later take off his own shoes and throw them into the crowd.

Someone threw a shoe at DaBaby during his performance at #RollingLoudpic.twitter.com/0KZxl4EeOa

Just to be clear, George Bush had to dodge two dress shoes in Iraq in 2008. DaBaby only had to dodge one “busted…Adida” in Miami yesterday. pic.twitter.com/L6TFLbNlaZ

DaBaby’s unprovoked serophobia (hatred or fear for someone living with HIV) and homophobia have earned him condemnation online.

Many noted that the comments further stigmatized people living with HIV or other sexually transmitted infections. It also furthers misinformation about how STIs work, as research shows that most STIs do not cause death alone, let alone in under three weeks.

Most deaths after becoming HIV-positive are from complications related to HIV, not from HIV alone, and mortality from HIV-related causes has drastically decreased due to recent advances in treatment against the virus.

Some also noted the hypocrisy in praising those who do not have a viral infection, during a pandemic caused by a virus that has infected millions of Americans.

Dababy is quite literally the corniest mf alive, I fear

Exactly wtf kind of stage presence is that? No “everybody having a good time?” “What’s Up Rolling Loud?” Just… homophobia and STI stigma. Good job

DaBaby has hit women, made homophobic comments, allegedly murdered someone & the victim's family says he's lying a/b it being a defense to robbery, continues to antagonize a BW he claimed to be a friend by working w/the man who shot her and people are still working with him???

To all the people LGBTQ+⚧ 🏳️‍🌈and people who living with HIV/AIDS that @DaBabyDaBaby offended at #RollingLoud just know you are loved and you are important NEVER let anyone especially this clown tell you anything different because In GODS eyes he loves you. #DaBaby @Interscope

Some of DaBaby’s fellow hip hop stars have defended him. T.I., a fellow rapper and reality show star, supported DaBaby’s remarks, suggesting they should be treated with “equality” compared to Nas X’s behavior.

The comments serve as a continuation of anti-LGBTQ rhetoric levied at Nas X all weekend following the release of his latest song, “Industry Baby.”

Da Baby is so triggered by Lil Nas X apparently.

Lmaoooo but he got a whole song with him. First they love you then they switch like…. pic.twitter.com/0V1or5DXd8

Right after his remarks, DaBaby revealed a surprise guest performer, Tory Lanez, to the audience.

Lanez is currently facing criminal charges related to an incident last year where Megan Thee Stallion suffered injuries from a gunshot wound in her foot. He pled not guilty on assault charges in October and faces an upcoming trial, which he is barred by injunction from commenting on publicly.

DaBaby’s set had followed Megan’s own set on the same stage. She recently called out DaBaby for working with Lanez. That also earned DaBaby condemnation.

What D* Baby did at #RollingLoud was awful on multiple levels- inc misogynoir & homophobia. On a personal level too, he was supposed to be Meg’s friend and what he did and has been doing is just cruel. Raggediest of the raggedy.

Concerns about the Rolling Loud festival were levied as the three-day fest was held without social distancing or other precautions against the further spread of coronavirus. Proof of vaccination or even claiming to be vaccinated wasn’t a requirement to attend.

Over 100 artists were scheduled to perform and crowds estimated to number in the tens of thousands took to Miami Gardens this weekend for the festival, held outside Hard Rock Stadium. Observers expect a “surge” to result from the festival.

Rolling Loud co-founder Tariq Chereff countered concerns by saying he was going to provide hand sanitizer at the festival.

Did someone say there are 80,000 people at Rolling Loud in Miami right now? *Sighs in Covid* pic.twitter.com/JA2FyPhpgS

Part of the main stage for Rolling Loud had collapsed prior to the weekend beginning. It had to be rebuilt prior to the festival commencing.

There was also criticism for several sets not being made available for fans that were watching online, such as Megan’s and Lil Uzi Vert’s sets.

Ummm part of the stage set to host Rolling Loud has collapsed in Miami Gardens. The festival was set to begin tomorrow pic.twitter.com/dYE6eGuOoi

Rolling Loud called DaBaby’s set after “ONE OF THE BEST SETS OF THE WEEKEND.”

They have not commented on the controversy arising from his remarks.

DABABY PUTTING ON ONE OF THE BEST SETS OF THIS WEEKEND !!!

Istanbul is an amazing must-see city. It also completely broke my heart.