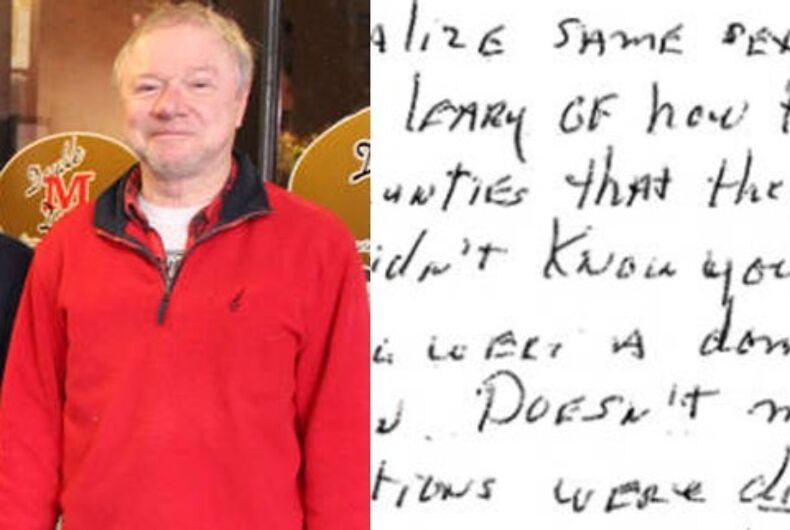 A retired teacher will spend 20 days in jail after he was busted “littering” on a neighbor’s yard. The man, dubbed “the mad shitter” by the gay couple who live in the home, has been defecating and urinating on their yard for years.

Jerry Detrick says he repeatedly pooped on the men’s yard because he’s a “Trump man” and they support Biden. They say he’s just a bigot and the abuse started when Obama was president. No matter the politics, the judge said he’s going to jail.

Greenville, OH police picked Detrick up shortly after 3am after Matthew Guyette saw him squatting in the bushes along his yard. Detrick confessed to doing the dirty deed “multiple times.”

Guyette posted on Facebook that authorities had finally arrested “the man who’s been shitting in our front yard for the past ten years.” He said Detrick would always use “3 or 4 crumpled up restaurant napkins he used to clean himself.”

“That was my clue that I had had a ‘visitor,’” he wrote. “Because it was on the edge of the front yard in the bushes and undergrowth we often wouldn’t see it except for those napkins.”

While things had been quiet for months, napkins had started appearing in the yard again recently.

“That’s when I thought ‘oh great, the mad shitter is back,’” he wrote.

Detrick was also ordered to write a letter of apology to the men and will perform 30 hours of community service. He was fined $232.

In his apology letter, Detrick stressed that he didn’t know the men were a gay couple.

“I realize same-sex couples must be extremely leary of how they will be accepted in communities that they live in,” he wrote. “Let me say that I didn’t know you were gay. I did know you were a Democrat. I am a Republican.”

“Nobody should have to live in their community fearing their neighbors,” he continued. “The mental aspect of not knowing who is doing bad things to you and why is very draining and probably very distressing.”

“I hope in the future you will find it in your heart to forgive me.”