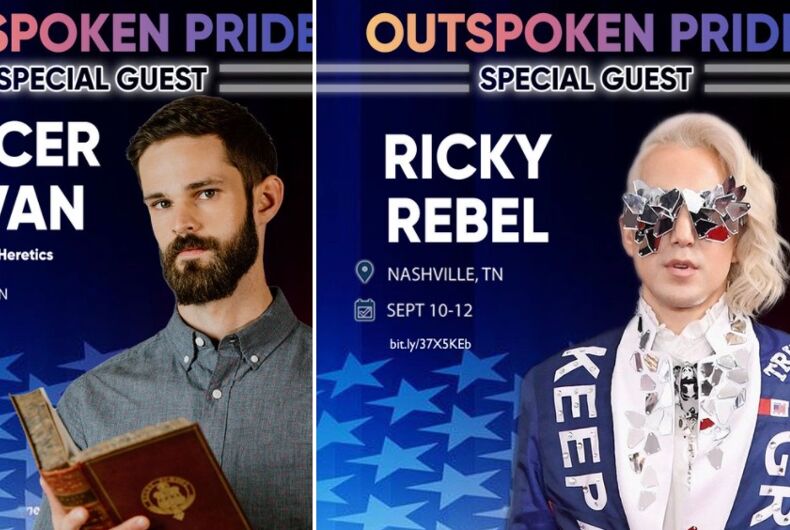 Spencer Klavan and Ricky Rebel will appear at an event for gay Trump supporters.Photo: Screenshot/Twitter

Disgraced former Rep. Aaron Schock (R-IL) is set to headline “OutSpoken Pride,” a Pride celebration for LGBTQ Trump supporters that will be held in Nashville this weekend with all the glitz and grift a modern gay MAGA party can muster.

Schock and former U.S. Ambassador to Germany Richard Grenell are getting top billing for the event, which is promising some of the biggest names in GOP queerdom, complete with publicity photos of other speakers that parody professional wrestlers.

Schock, a disgraced former Congressman who voted against LGBTQ rights, came out as gay after he was photographed shoving dollar bills down a male stripper’s underwear and making out with a man at Coachella. Grenell was so unpopular in Germany that he was shunned by his fellow diplomats and reviled by the general public.

The lineup also includes luminaries like D-list celebrity singer Ricky “American” Rebel and Spencer Klavan, who will be performing as “The Preacher.” Klavan runs a rightwing podcast called The Heretics.

Rebel has opened for several noteworthy acts, but is probably best known for wearing a Trump-inspired costume to the Grammys in 2019 that earned him a moment on Fox News and warm fuzzies from queer insurrectionists across the nation. He did not win an award.

Activist Anthony Rai could be portraying a boxer beaten by a Russian super soldier and dreaming of a comeback. He is listed as a speaker, but has no extensive knowledge about anything pertinent to share. Actors who have portrayed similar characters in movies and on television normally just grunt a few words.

All five men will be speaking to the crowd to show off their extensive expertise in sucking up to a political party that condemns them and describes them as “abominations” and “perverts.”

A handful of other internet shysters and self-proclaimed political gurus will fill out the roster of speakers, including Rep. Josh Higganbotham (R-WV), Rep. Joe Alexander (R-NH), and Rep. Eddie Mannis (R-TN).

The event is being hosted by the Log Cabin Republicans. The group was once respected, if not embraced, inside the queer community but has taken a hard turn toward extremism and Trump worship under the current leadership. While the organization once fought to end Don’t Ask Don’t Tell and pass nondiscrimination protections for LGBTQ people, it now opposes the Equality Act and spends most of its time trolling social media.

Most mainstream members of the group, including the former Executive Director, fled the group after it embraced Donald Trump.

The Eventbrite invitation makes sure to note that brunch will be served.