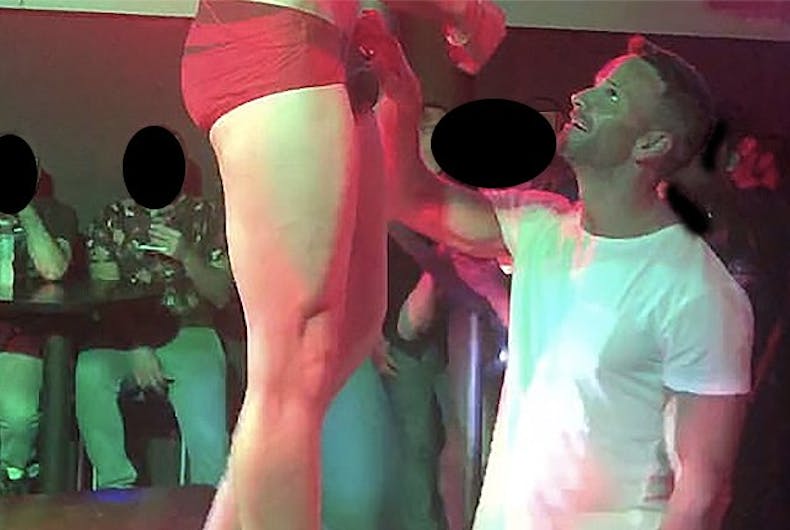 Disgraced anti-gay former Republican Congressman Aaron Schock is utterly and completely straight. Why would you ask such a question?

After a string of you-might-as-well-come-out-already moments, Schock has been filmed stuffing dollars into a stripper’s undies in a Mexico City gay bar. It does not appear to be the first time the former legislator has shown his appreciation for the male physique.

“The last person I would expect to see in Boy Bar is a former Republican congressman,” the person who filmed Schock handing out the bills told The Daily Mail. “I was taking a video of the go-go dancer on stage and all of a sudden I saw him. He looked like he was enjoying himself.”

The former Congressman was spotted having lunch at the National Museum of Anthropology’s cafe with an unnamed young male companion the day before.

Schock, who made a splash in the nation’s capital with his clothing choices, Instagram photos, and interior decorating choices, resigned after being accused of illegally using campaign funds to finance his over-the-top lifestyle.

The casual acceptance of the still closeted lawmaker has irritated many in the community who feel he hasn’t paid his dues for opposing his own equality. Last month, activist James Duke Mason posted photos of Schock with other gay men at the Coachella music festival, posing shirtless and having a grand old time. In a video released by our sister site, Queerty, Schock is shown dancing with another man with his hands down the man’s pants.

In May he was was snapped poolside at the Standard Hotel in West Hollywood accompanied by an attractive speedo-clad young gay man who was on Scruff while they lounged by the pool. Later he was spotted chatting up and ogling another young man.

A request for comment was not returned by time of publication.