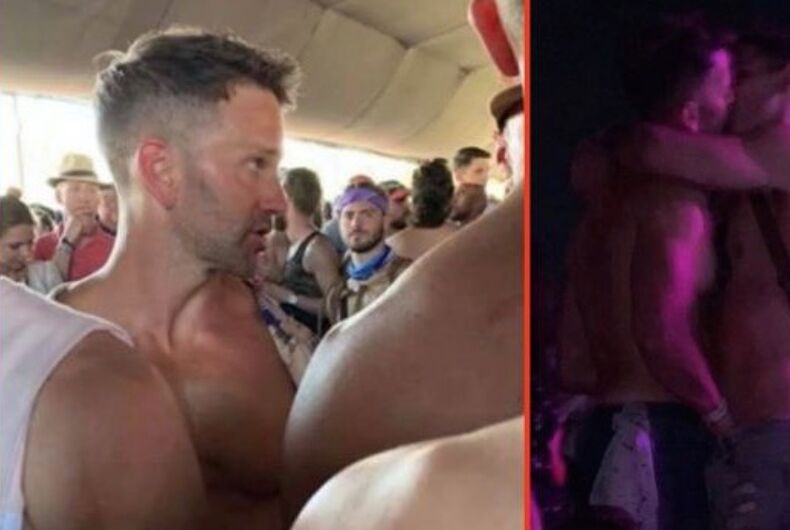 The GOP ex-congressman whose sexuality was DC’s worst-kept secret has been spotted making out with another man at Coachella. Former Representative Aaron Schock who made a splash in the nation’s capital with his clothing choices, Instagram photos, and interior decorating choices, resigned after being accused of illegally using campaign funds to finance his over-the-top lifestyle.

The casual acceptance of the still closeted lawmaker has irritated many in the community who feel he hasn’t paid his dues for opposing his own equality. Activist James Duke Mason took to Facebook to share photos of Schock with other gay men at the Coachella music festival, posing shirtless and having a grand old time.

Related: The ‘outing’ of Aaron Schock: It actually matters how he plays in Peoria

“Normally I wouldn’t comment on something like this, but I am just infuriated by these images of former Republican (and anti-gay) Congressman Aaron Schock partying with a group of gay men at Coachella. The fact that he would think he could show his face in public, particularly when he has NEVER renounced or apologized for his votes against gay marriage, gays in the military and against anti-discrimination laws is astounding,” Mason wrote.

“My intention isn’t to out him or target him personally, but simply to point out the hypocrisy. I saw him at a recent gay social event in West Hollywood and shook his hand before I even knew who he was; he should really be ashamed of himself. And the gays who associate with him without calling him out should know better. It really is a disgrace.”

But Schock’s outing didn’t end there as multiple sources confirmed Schock’s antics at the music festival. But then the other shoe dropped after our sister site, Queerty, published a photo of the ex-Congressman making out with another man while shoving his hand down the man’s pants.

One of the defenses Shock used to wiggle out of corruption charges for his profligate spending while in office was that federal investigators asked his friends and family about his sexual orientation in a bid to discover whether or not the hot photographer Schock kept on staff was actually his boyfriend.

Normally I wouldn’t comment on something like this, but I am just infuriated by these images of former Republican (and…

Anti-LGBTQ activists heckled Pete Buttigieg in Iowa, but his response had everyone laughing