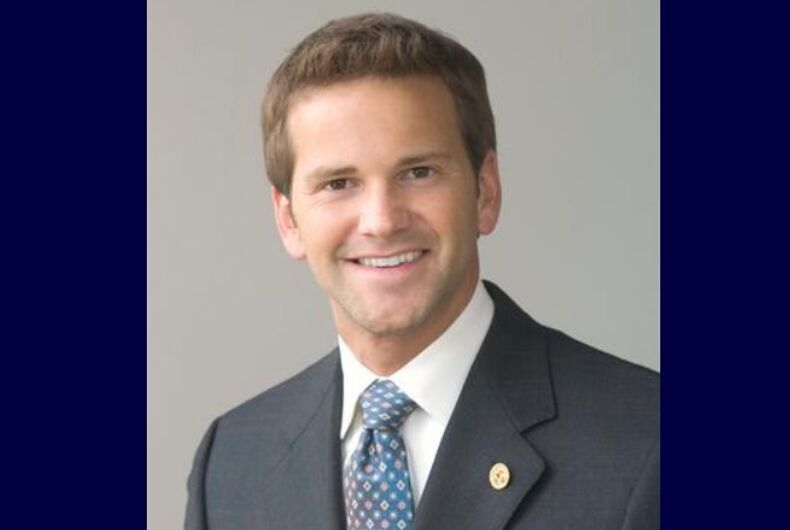 Former Rep. Aaron Schock (R-IL) has come out as gay in a long statement on Instagram.

Schock, 38, was a U.S. Representative from 2009 to 2015, when he resigned in disgrace related to a scandal involving his alleged misuse of public and campaign funds.

Related: Charges were dropped against Aaron Schock. He had a gay old time in West Hollywood to celebrate.

Even though he was a solid vote against LGBTQ equality while in Congress, over the past several years he has been spotted making out with a shirtless man at a festival while putting his hand down the man’s pants and attempting to pick up a man while wearing a small swimsuit at a hotel in West Hollywood.

Schock, who was still in the closet at the time, wasn’t just tapping his toes in airport bathrooms or hiring discreet sex workers like Republican closet cases usually do. He was apparently living his best life in gaystream culture.

Acknowledging that “this will come as no surprise,” he said that he has been slowly coming out to people close to him – “my mother, my father, my sisters, my brother, and my closest friends” – before coming out publicly.

His long Instagram post discusses his life story, how he was raised in a Christian fundamentalist family and forced to memorize Bible verses while growing up.

“I didn’t want to think about it,” he said about how he realized he was attracted to boys as a teenager. “I always preferred to force my thoughts in another direction, leaving a final answer about that for another day.”

He said he was driven to succeed in his career because he was ignoring his personal life. When he was first elected to Congress, he said the media speculated about his sexuality since he was single, dressed well, and worked out a lot.

“If you want to learn something about the ‘woke’ media, Google my name and consider how prominently that fabricated lie, still without even a single source to back it up, will feature in stories about me by people who otherwise call themselves journalists,” he wrote, saying that he never even watched Downton Abbey, even though one story said that he decorated his office in the style of that show.

“It was another way, albeit more sophisticated, to be teased about being gay.”

In 2019, charges against him were dropped if he agreed to pay back over $100,000 in campaign and public funds. He wrote in the Instagram post, though, that the charges were false and prosecutors used them as an excuse to try to out him.

That’s when he decided to go to Coachella and was photographed making out with a man and with another group of shirtless gay men. The headlines reached his mother before he could come out to her, and she rejected him.

But he still had to come out to the rest of his family.

“What I had to share was unwelcome news to every single person in my family, out of the blue in some cases, and was met with sadness, disappointment, and unsympathetic citations to Scripture,” Schock wrote. “It hurt to hear all this.”

“I do hold out hope that, over time, my family will come to accept me as I am,” he wrote.

He said that he is still getting emails from his family “trying to sell me on conversion therapy.”

While it’s true that Obama also opposed marriage equality in 2008, it doesn’t follow that Obama and Schock were in the same place when it came to LGBTQ equality. Obama supported anti-discrimination protections, helped pass hate crimes legislation, lifted the ban on LGB people serving in the military, supported civil unions, and eventually came around on marriage equality. He advanced LGBTQ equality more than any U.S. president ever has.

“That fact doesn’t make my then position any less wrong, but it’s sometimes easy to forget that it was leaders of both parties who for so long wrongly understood what it was to defend the right to marry,” Schock wrote in his Instagram post, glossing over major differences between his voting record and that of his Democratic colleagues.

Schock had a 0% rating on HRC’s Congressional Scorecard. He voted against repealing the ban on LGB people in the military and against expanding hate crimes legislation to include sexual orientation and gender identity. In fact, he opposed any attempt to pass pro-LGBTQ legislation when he was in Congress, not just those bills related to marriage.

But he did acknowledge that other LGBTQ people – including those who criticized him – have helped create the world he is coming out in now.

“I can live openly now as a gay man because of the extraordinary, brave people who had the courage to fight for our rights when I did not: community activists, leaders, and ordinary LGBT folks,” he wrote. “Gay bloggers who rallied people to our cause. I recognize this even in the face of the intense and sometimes vicious criticism that I’ve received from those same people.”

“The truth is that if I were in Congress today, I would support LGBTQ rights in every way I could.”

Link in profile to full text

A request for comment was sent to Schock and this article will be updated if LGBTQ Nation receives a response.