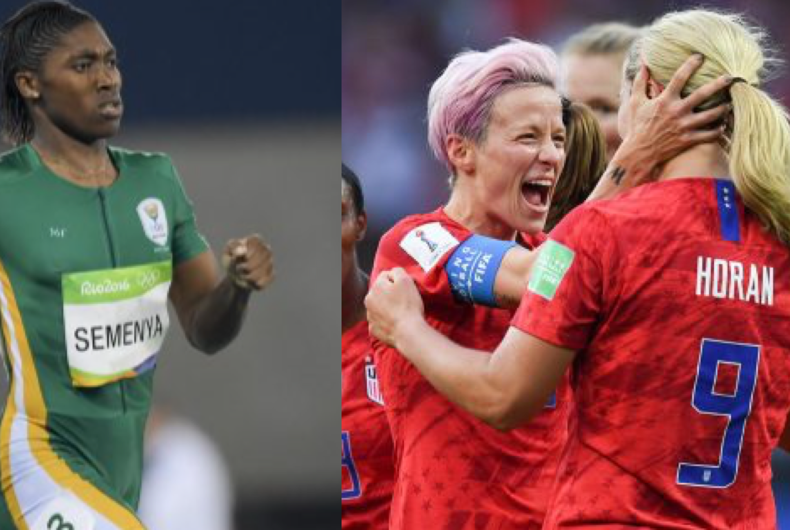 While Megan Rapinoe (right) and hundreds of other LGBTQ athletes are competing at what's being dubbed the "Gaylympics," Caster Semenya (left) and others are not able to.Photo: Shutterstock/LGBTQ Nation composite

The 2020 Olympics are finally underway, although they’re taking place more than a year after they were initially planned and amidst an ongoing pandemic affecting millions around the world.

One positive: the extra time and addition of new sports at this Olympics led to a record level of LGBTQ athletes earning a trip to Tokyo — over three times more athletes than previously recorded at the 2016 Olympics in Rio de Janeiro.

There are also many negatives, however. Due to archaic or biased rules, a lack of LGBTQ rights and protections around the world (including in Japan), and a lack of preparedness and resources, some of the best LGBTQ athletes didn’t make the trip, and the ones that did have been misgendered, publicly maligned, and even outed while in Japan.

While the level of representation and visibility being broadcasted around the world can’t be overvalued, there are numerous reasons the Olympics should not be happening, writer and author Britni de la Cretaz told LGBTQ Nation.

But “Before I was a writer, I was a community organizer and I was actually part of the group that protested the Boston bid to host the Olympics in 2024, and we ultimately defeated that bid,” they noted, “so I’ve actually been plugged into a lot of the issues with the Olympics for longer than I’ve even been writing about sports.”

De la Cretaz explained, “I think the Olympics is worth examining because this is not working as it might have been intended. There are too many people who are harmed by this spectacle that is put on every four years, two if you include the Winter Olympics.”

“They tend to be really bad for the host countries and the residents there, they tend to displace a lot of people, and they tend to put security states in place in terms of who qualifies and competes,” they explained.

They cite the “nationalist fervor, which I think is its own somewhat problematic thing,” but also the more serious issues that come with building expensive facilities to be used for a few events over a three-week span: “We know that it is the most marginalized folks in these host cities who are going to be impacted by this. They are much more likely to be houseless people of color, people of low income, sex workers, and that queer and trans people are disproportionately likely to be members of those communities, too. So this is our community that is really impacted by this.”

This is also evident to de la Cretaz because events similar to the Olympics, like the Gay Games and Paralympics, are not fixing some of the core issues that come with the Olympics. The upcoming Gay Games in 2022 are being hosted in Hong Kong, where the democratic status of the city is being restricted, leaving many LGBTQ people at risk of marginalization, and earning Gay Games organizers criticism.

Even with the current Olympics, while many LGBTQ athletes from dozens of countries are getting a chance to shine on what’s possibly the world’s biggest stage, Japan has little legal protection for the rights of LGBTQ citizens living in the country — which violates the Olympic Charter and defies an agreement that Japan entered when they were awarded the opportunity to host the Games.

“In Japan, new anti-discrimination legislation was promised before the Games were to start. It hasn’t been enacted, and we know that Japan is really a hostile country for queer and trans folks,” de la Cretaz explained. “So we’re celebrating that these are the queerest Olympics and the first with openly trans competitors, by sending those folks in the middle of a global pandemic to a country that does not view them as deserving of equal rights or as entirely human.”

There are also allegations of bias in how the Olympic locations are chosen every few years. While several cities and countries, like Tokyo, have hosted multiple Olympics, there has never been a single Olympic event in all of Africa or the Middle East. The first Olympic event ever scheduled to take place in Africa is set for 2026, and that is the Youth Olympic Games.

Several have argued that it would just make more logistical and equitable sense to host the Olympics in one centralized location instead of moving it around every cycle.

Besides the issues with how the Olympics are run or where they choose to host them, these specific games have seen issues as well. These are the first Olympic games to include openly trans competitors, as de la Cretaz notes, but several LGBTQ athletes have been excluded — some specifically because of their identity, and some because of rules that are unfairly applied.

One reason that discrepancy exists is that each sport has a different governing body, de la Cretaz explained, and track athletes have much stricter guidelines they’re forced to follow than even the International Olympic Committee (IOC), which governs all of the Olympics as a whole.

USA Track & Field, which governs track and field in the United States and levied the punishment against Richardson, agreed themselves that the rules need to be changed, but they were in accordance with the prior World Anti-Doping Agency guidelines and updating them right before the Olympics was deemed “detrimental to the integrity” of the sport.

Similarly, guidelines that have shifted from place to place around the world have drastically affected athletes, cis and trans, and prevented several from making it to the Olympics. “When we look at who is disqualified based on testosterone levels, it’s mostly been track athletes. The reason for that is because their governing body has actually a stricter a lower testosterone level that they allow than most of the other governing bodies and then the IOC. So that’s why you see it impact that sport more directly,” de la Cretaz said.

World Athletics is the international governing body of most track and field sports, and they have stricter rules regarding hormone levels in the body. They have deemed gold medallist Caster Semenya’s naturally-occurring testosterone to be too high and excluded her from participating in these Olympics and other events as a woman, although she was assigned female at birth.

“We also saw two African runners disqualified for having testosterone levels that were deemed too high based on the IOC’s policy. A lot of people really were really shocked that that policy was even in place, but it’s been in place since 2015,” said de la Cretaz.

“It was designed for trans women to kind of police who can be considered a woman and compete against women, but it has ensnared a lot of women and intersex athletes like Caster Semenya over the years as well. So I think that’s like the tip of the iceberg. There’s just like really a lot of issues with the Olympics and the way that they’re run.”

Further, the LGBTQ Olympians that have made the trip are having issues too. De la Cretaz reported on Alana Smith and Quinn, the first trans and non-binary athletes to compete at the Olympics, who were misgendered and not addressed by their correct pronouns during broadcasts of their sports. Many of the broadcasters have issued apologies and explained that they and the Olympics failed to research the competitors adequately before the Games.

There have also been multiple reports of Olympians in Tokyo being outed as they use Grindr.

“There’s all that, and athletes are testing positive for COVID-19,” de la Cretaz added.

Still, it’s hard for de la Cretaz to not feel the excitement and pride for the several out athletes — currently counted at 177, according to Outsports — bringing a remarkable level of representation to an event of this magnitude, specifically in many sports where they are generally not represented.

“I’m excited that there are actual out trans people competing this year,” they said, but also “nervous, because the IOC will be revisiting their policies after these Games and I don’t know if it’s going to be more or less restrictive. It would be really odd if on the heels of such a groundbreaking year, we saw a reversal on that.”

Still, this is a sign of a potential future where LGBTQ representation is more and more normalized around the world, even here in the United States, as anti-LGBTQ activists make what is likely their most stringent push to limit civil rights for LGBTQ people ever.

“I think overall, society itself and people in general are more accepting of queer people than they have been at any other point. So I think that that is probably the biggest difference. My hope is that the athletes are received very well, and I hope that that is kind of a turning point,” de la Cretaz said.