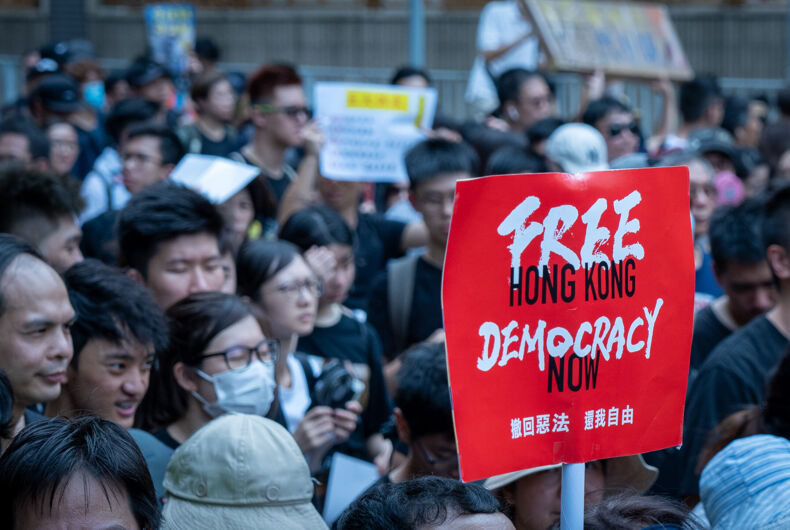 It was one of Hong Kong’s first Pride marches. And the streets were packed. In what had traditionally been a tradition-bound, socially conservative city, the sight of Hong Kongers standing up and standing out was heart-warming. Having just moved to Hong Kong, that first Pride represented what I came to love about my adopted home — a largely open, liberal, and dynamic city. Hong Kong was a unique place, cosmopolitan energy at the crossroads of Asia — and at the doorstep of oppressive, authoritarian China.

More than a decade later, it’s all fading away. Hong Kong has become a police state where the rights of all Hong Kongers have been erased with the stroke of a pen. Beijing is forcing Hong Kong to get in line with the way things are done — or rather, not done — on the mainland. After passing a new “national security” law a year ago, Beijing has all but erased civil liberty in Hong Kong.

Hong Kongers — including the LGBTQ community — no longer have freedom of speech or assembly. It is illegal to freely demonstrate. Placing a sign in your window can land you in prison. With Beijing’s backing, authorities in Hong Kong have aggressively targeted journalists, democratically elected politicians, teachers, students, and anyone whose opinions or way of life do not conform to the prescriptions of Communist China. The gay community has not been spared.

Just last week the Chinese government shuttered bare remnants of university LGBTQ groups online on the mainland. Dissent and community organizing of any kind is illegal in China, including pro-LGBTQ activism. Two of Hong Kong’s most prominent LGBTQ leaders have been caught in Beijing’s anti-democracy dragnet — Raymond Chan Chi-chuen and Cyd Ho. Chan was the only openly gay lawmaker in Hong Kong’s legislature, and Ho is one of the city’s pre-eminent LGBTQ right’s activists. They were both arrested for participating in peaceful protests.

Shockingly, in the face of this assault on the civil rights of all Hong Kongers, the Federation of Gay Games has decided to move forward with hosting the 2022 Gay Gay games in Hong Kong. This means first Gay Games hosted in Asia are slated to take place in a city where civil and human rights demonstrations are now effectively illegal, and where activists are summarily locked up.  The Gay Games is not only rewarding the Hong Kong government’s crackdown on civil rights, it is enabling and encouraging a further crackdown by giving authoritarianism a facade of liberalism.

Let’s be clear: there can be no Pride in a police state. The Gay Games are not just another sporting event. The Gay Games Federation’s bylaws explain its mission as “to promote equality through the organization of the premiere international LGBTQ+ and gay-friendly sports and cultural event known as the Gay Games.” How does that square with holding the games in a city where LGBTQ activists and others sit in prison for speaking up? How are the Gay Games promoting “equality” by drawing athletes to an authoritarian state that actively persecutes its citizens?

Let’s look at the current state of “equality” in Hong Kong. Lawmakers who disagree with Beijing have been removed from Hong Kong’s legislature. Pro-democracy candidates have been barred from running for public office. Activists have been locked up. Peaceful demonstrations are outlawed, and organizers prosecuted. Recently, Hong Kongers have been targeted for wearing something black, wearing something white, carrying something yellow, holding up blank pieces of paper, sending a newspaper article to a friend, and even carrying a bundle of chives. In fact, a Hong Konger who tweets this article could go to prison. Hong Kong has become an authoritarian state.

Around the world, governments and international organizations are speaking up. The European Union sanctioned Hong Kong’s leaders. The Biden Administration has condemned the crackdown. Downing Street has been forceful in taking Beijing to task. Human Rights Watch has issued reports chronicling the deteriorating human rights situation. While the Gay Games touts holding the games in Hong Kong as somehow celebrating “equality,” Hong Kong still doesn’t allow same sex marriage, and the Beijing-supported government has openly fought against expanding rights for LGBTQ citizens.

The issue facing the Gay Games is not just one of principle — LGBTQ athletes and others attending the games are at risk. The new national security law allows authorities to prosecute anyone — including foreigners — for offenses committed overseas, including what they say on social media. If athletes voice opinions authorities find objectionable, they can be arrested upon arrival in Hong Kong. Or prevented from leaving. So much for “equality.”

Luckily, it is not too late. The Gay Games Federation should act quickly to relocate the first Gay Games in Asia to another city that does stand for equality, civil rights, and the values we as an LGBTQ community hold dear. For example, Taipei, Seoul, or Sydney, would all be options.

In April of this year, Hong Kong activist, Margaret Ng, a 73-year-old former lawmaker, was put on trial for participating in a peaceful demonstration. At her sentencing hearing she warned, “When the people, in the last resort, had to give collective expression to their anguish and urge the government to respond…I must be prepared to stand with them, stand by them and stand up for them. Otherwise, all my pledges and promises would be just empty words.”

How tragic it would be if half a century after the Stonewall riots, the gay community were to forfeit the principles others fought so dearly for. Do we truly believe in equality? If so, let’s make the Gay Games count. Let’s make a move for equality, and move them out of Hong Kong.

Adam Nelson is a senior advisor at the National Democratic Institute in Washington, DC.

A Christian teacher demanded a religious exemption to using trans students’ names. A judge said no.