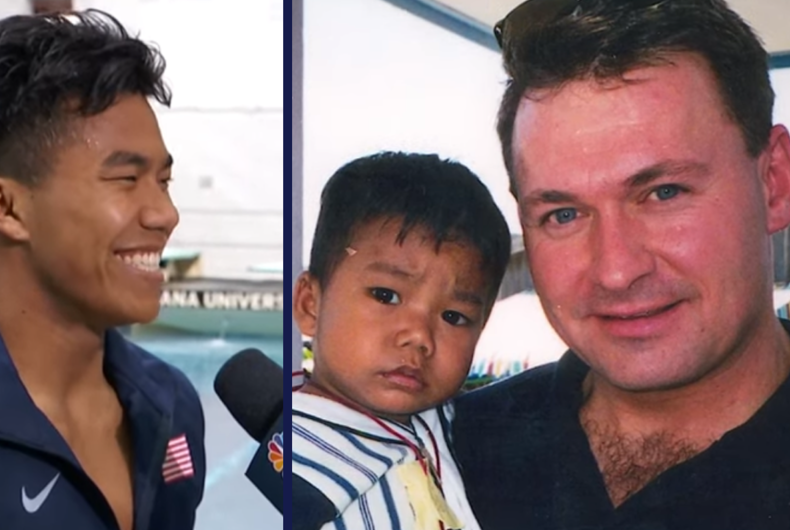 Olympic diver Jordan Windle (left) has always attributed his success to the love of his dad, Jerry, who adopted him from a Cambodian orphanage as a toddler.Photo: Team USA/NCAA/Screenshots

Jordan’s also the adopted child of Jerry Windle, a single gay man who didn’t think he’d be able to become a parent over 20 years ago. Jordan believes, “I wouldn’t be here if it wasn’t for him.”

Jordan earned his trip to Tokyo just two months ago, after previously trying out for Olympic teams as far back as when Jordan was 13. With the help of out Olympic champion diver Greg Louganis, Jordan’s qualification was a dream almost 15 years in the making.

Long before that, Jordan was born in Cambodia where he ended up in an orphanage by the time he was 18-months-old, reportedly because his birth parents had passed away due to illness.

At that time, Jerry was a single gay man in Florida. He opened a magazine and read a story of a single man who had adopted a child from an orphanage in Cambodia — the same one that Jordan was in. So Jerry began making calls.

“The article listed (the number of an adoption service) and so I called the number and I said ‘I just read an article, is it possible for a single person to adopt a child?’ and they said ‘Yes, it is,'” Jerry recalled to Today.

Soon he received information on the process — including a picture of Jordan.

“I took a look at his photo and the second I saw this watery set of eyes staring back at, I knew that this baby was my son and I was his father,” said Jerry.

It took some time, but eventually Jerry completed the process and Jordan became his son. Raising him near Fort Lauderdale, Florida, Jordan was first enrolled in aquatics camp after all the other summer or sports camps were completely full.

Coaches at the aquatics camp immediately saw Jordan’s potential. “They said if you put Jordan into diving, I can promise you he is going to be a national champion one day and he might even be an Olympian,” Jerry recalled.

While the training began, the reality of possibly becoming an Olympian didn’t set in for Jordan until he was 10-years-old. At 12, he qualified for his first Olympic trial, which would have sent him to the 2012 Olympics in London at just 13-years-old.

He didn’t make the team, but getting there was achievement enough. His early stardom and training with Louganis earned him the nickname “Little Louganis” from within the diving community.

In 2011, Jordan and Jerry wrote a book, An Orphan No More: The True Story of a Boy — Chapter One. (Louganis wrote the foreword.) Their story has only become more inspiring from there.

He eventually qualified for the 2016 Olympic trials as well, and at 16, he placed fourth in the trial, just short of making the team being sent to Rio de Janeiro.

By that time, he earned a scholarship to attend the University of Texas at Austin, where he would continue his diving career under the tutelage of Matt Scoggin.

Scoggin has said that Jordan always “looked like he was just having fun.” Jordan said he’s learned that from Louganis.

“Greg Louganis taught me since the beginning to always have fun and treat it like a sport’s supposed to be – go out there and be a competitor – and that’s what I intend to do,” Jordan said earlier this year.

At Texas, Jordan has won several divisional and All-American titles, and in 2017 he became a national champion.

Then came his third Olympic trial. He finally made the team, completing a lifelong dream that’s coming to fruition this week, when Jordan competes at the men’s 10-meter platform diving competitions on August 6, toward the end of the Olympic Games.

“I know the hard work that he’s put into it, it’s been earned, and I’m just really excited and proud that with his coaching staff, he’s been able to accomplish such an amazing feat,” Jerry has beamed.

As the competition nears and Jordan will put years of work on display for the world, he’s still proud to say he’s dived this long because of how proud it made his father.

“I tell everyone, when they ask me why I dive, I dive purely for my dad and how much he loves watching me. Without him making all the sacrifices that he has, and his love and support the whole time we’ve been together, I really wouldn’t be where I am today,” Jordan said. “I have him to thank for everything, all my accomplishments.”

“Watching Jordan in the air is literally like watching art happen before your eyes,” Jerry has said.

“I can usually hear (my dad) out of everyone in the audience, which is awesome,” Jordan said, so “not having him at the Olympics will be different. I wish he was there, but that doesn’t really change what I’m going there to do: To have fun, show off a little bit, and put on a show for everyone. That’s going to be my intention and I’m hopefully going to make him proud.”

But unlike some of those competitions, it’s not just Jordan’s dad that’s cheering for him. Two countries, and many around the world, are rooting for the 22-year-old.

“We didn’t expect it, we didn’t know how much the people of Cambodia knew Jordan,” Jerry said when they went to Jordan’s native country for a diving competition.

“They knew him because of the internet,” he said, noting they even called him by his native Cambodian name, Pisey.

As his dad has told him and written on signs he holds up at competition, he’s diving for more than just one flag or person. He’s diving for humankind.

The preliminary round of Jordan’s competition commences on August 6 at 2:00 am Eastern Standard Time. The semi-final and finals for the 10-meter category will commence by the next day, the final diving competition for the Olympics.